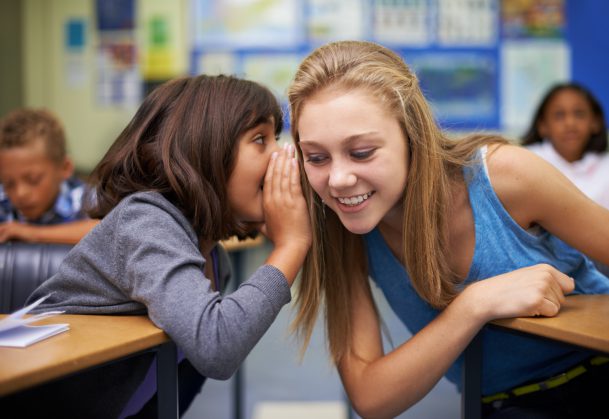 Blabbermouth, rumormonger, backbiter – whatever the word, gossips have long been maligned for sowing drama and discontent. New research in Psychological Science suggests, however, that getting the scuttlebutt on your friends, neighbors, and colleagues’ social slip-ups may be key to building community.

“People who engage in deviant acts make an important contribution to the functioning of societies by drawing people’s attention to, and clarifying their understanding of, the existing social norms,” the study authors write.

In fact, the authors add, this increase in social functioning may be one reason that humans evolved complex language in the first place.

In the studies, two groups of just over 100 students were split into pairs to view a video featuring an act of negative-deviance (littering and hopping a fence), positive-deviance (cleaning up someone else’s litter), or neutral behavior (ignoring the litter). Students in the first study completed a questionnaire about their perception of social norms on campus and their desire to gossip about what they had seen, whereas pairs in the second study were also recorded while talking about what they thought of each video.

The survey revealed that students in both studies expressed a desire to gossip about what they had seen. Those who were given an opportunity to do so also reported a greater understanding of the prevailing norms on campus.

The cumulative findings of these studies suggest that attention-grabbing behaviors may be more than just fodder for the gossip mill, says coauthor Kim Peters, a professor of psychology at the University of Queensland in Australia.

“It could also reflect the possibility that these behaviors challenge people’s beliefs about what members of a community do and should do, which motivates them to validate their beliefs in conversation with others,” says Peters.

Gossiping students also reported a stronger social bond with their partner, which, Peters says, suggests that observing deviance may create a sense of solidarity between people who share the same behavioral beliefs. Notably, gossip on negative and positive deviance seemed to affect students’ social understanding in similar ways.

“This suggests that while negative content may dominate gossip, we can learn as much by discussing heroic behavior as disgraceful behavior,” Peters says.

It remains to be seen how the cognitive and relational benefits found in these studies may play out in conversations beyond a laboratory setting. For instance, Peters says, the conversations that accompany real life deviance, exemplified by the #MeToo hashtag, may influence people’s behavior and lead to a more supportive social environment.