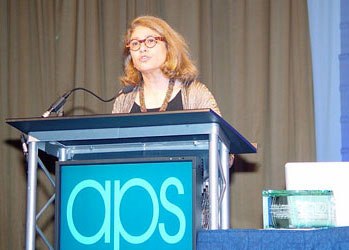 The presidential symposium at the APS 23rd Annual Convention challenged four scientists to give modern scientific support to Aristotle’s ancient saying: “Man is by nature a social animal.”

“Twenty-three hundred years later we have a science of all this,” said APS President and symposium chair Mahzarin Banaji of Harvard, upon introducing the speakers. “The serious empirical study of social cognition has its earliest signs in the middle of the 20th century, but until now we hadn’t really taken a position on some of the most basic questions about ourselves as social animals.”

Laurie Santos of Yale gave a “whirlwind” summary of how primate behavior is informing what we know about social cognition in humans.

“We can get some glimpses into the kind of experiences that might shape human cognition across the life course,” Santos said.

Santos described a series of tests in which researchers showed monkeys pictures of others monkeys — some of whom were in their same group, and some from a rival group. The researchers found that out-group monkeys captured much more attention than in-group monkeys — suggesting that certain in-group social biases and implicit prejudices in humans have roots in primate ancestors.

Elizabeth Spelke of Harvard described the great amount of social cognitive development that occurs during infancy.

The key question is why infants are so social. Some have believed babies are “asocial blobs” that are bathed in a social world, while others contend that a rich set of evolutionary forces establish our social nature at birth. Spelke offered a third possibility: humans may be endowed with a natural system for navigating a social world, but this system is just a foundation upon which more advanced social capacities grow.

Spelke’s Harvard colleague Jason Mitchell examined human sociality in adults through the lens of neuroscience. Brain imaging has enabled researchers to look behind behavior and “develop new ideas of what relates to what,” he says. For example, tests have shown that certain parts of the brain are activated when people answer non-social questions, but that other parts are only aroused when social questions are posed. Social cognition is therefore a very distinctive form of brain behavior, Mitchell argued.

The final speaker, Susan Fiske of Princeton, summoned a more recent muse than Aristotle to describe the study of social cognition — “One word: plasticity,” Fiske began, playing off a famous line in “The Graduate.” Research has shown that humans are very agile, that social demographics are shifting, and that the science of human cognition is impressively nimble.

It certainly is when a Greek philosopher can be connected, through psychology, to Mrs. Robinson.