Observer > 2011 > February > When the Zebra Loses its Stripes 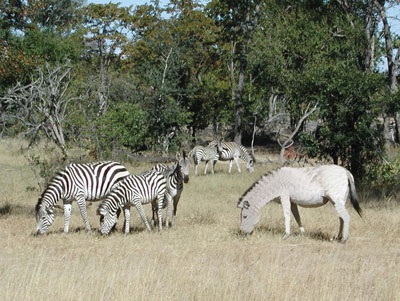 The capacity to remember that a zebra has stripes, or that a giraffe is a four-legged mammal, is known as semantic memory. It allows us to assign meaning to words and to recall general knowledge and concepts that we have learned. The deterioration of these capacities is a defining feature of semantic dementia and can also occur in Alzheimer’s patients. A group of French neurologists and neuropsychologists has identified the elements of semantic memory that are the first to deteriorate and may thus have explained why a surprising phenomenon known as hyperpriming can be seen in the early stages of Alzheimer’s disease.

Mickaël Laisney and colleagues, from the university hospitals at Caen and Rennes, studied the word-recognition abilities of 16 Alzheimer’s patients and eight patients with semantic dementia. The patients were shown pairs of words in succession and were asked to indicate whether they recognized the second word in each pair. Because of an effect known as semantic priming, people tend to more quickly recognize a word (e.g., “tiger”) if they have previously seen a related word (e.g., “lion”), and a previous study had found this effect to increase further in the early stages of Alzheimer’s disease, whereby patients recognized related words more quickly than healthy patients. This hyperprimingphenomenon is surprising, because it is at odds with the idea of memory loss in Alzheimer’s patients.

However, the findings of this new study shed light on the puzzle by showing that the first elements of semantic memory to deteriorate are the distinguishing characteristics of a concept, such as a zebra’s stripes or a giraffe’s long neck. This causes a blurring of closely related concepts, e.g., zebras and giraffes becoming generic four-legged African mammals, which the authors suggest as the reason why patients temporarily find it easier to recognize related words in the early stages of memory loss. The effect disappears in later stages of the disease.

Observer > 2011 > February > When the Zebra Loses its Stripes

Scientists from Europe and North America share the latest findings on the promise and limitations of video games, “smart” drugs, and other tactics that people are turning to for cognitive enhancement. More

Who Are You? Identity and Dementia

Phineas Gage is arguably the most famous case study in the history of neuroscience. Gage was a railroad worker who in the autumn of 1848 was helping to prepare a new roadbed near Cavendish, Vermont, when an accidental explosion sent a three-foot tamping iron through his head. The missile entered More