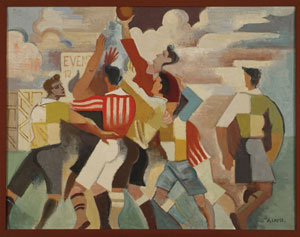 Like it or not, competition is a fact of life, the driving force behind evolution, and an intrinsic part of the human experience. Any time two or more parties, whether they are individuals, sports teams, corporate groups, political parties, or countries, strive to attain a goal that cannot be shared, competition will occur.

The goal can be concrete (survival, being hired, winning a soccer match, becoming a millionaire) or more ephemeral (being beautiful, gaining prestige), but it usually requires an investment of energy and resources. For example, in a rugby match, two teams compete to score the most points and win a trophy (a concrete goal) but winning also means attaining the more elusive goals of increased pride, prestige, and satisfaction at having bettered an opponent.

“There exists, in the human organism, a drive to evaluate his opinions and abilities” wrote Leon Festinger in his 1954 “A Theory of Social Comparison Process,” a landmark publication in social psychology.

Festinger hypothesized that people evaluate their own abilities and opinions by comparing them to the abilities and opinions of others. Both positive and negative comparisons can be very impactful, and the urge to reduce “discrepancies” between ourselves and those around us can trigger competitive behavior or actions to protect our superiority (Garcia & Tor, 2007).

In fact, the need for comparison with others is so great that the very absence of physical or social comparison can lead to unstable subjective evaluation. Having people around us is therefore necessary to provide an effective point of reference that enables us to understand ourselves.

Given that competition is such an integral part of daily life in multiple areas, including education, sports, business, and politics, surprisingly little is known about the group dynamics of competition. For example, does knowing that one is up against hundreds of other qualified candidates for a job drive an individual to despair, or does having a large number of competitors increase an individual’s drive to compete?

It is relatively easy to compare one’s personal performance amongst a few competitors, such as when comparing your grade to that of 15 high-school or graduate-school classmates. It is easy to keep tabs on each student’s capabilities, and what is needed to obtain a higher grade in the class. But what happens when the number of competitors is large? Imagine looking around a class of 200…would your feelings of competitiveness change?

Psychologists are working to understand the nature of competition in groups, and what effect the size of one’s competitive group has on behavior. In their 2009 article “The N-Effect: More Competitors, Less Competition,” Stephen M. Garcia and Avishalom Tor showed that the number of competitors an individual has can have a significant impact on how competitive that person will be.

“Our studies show that we have a very clear effect of N; as N goes up, motivation and effort — which often affect performance — go down,” says Tor, Senior Lecturer at the University of Haifa Faculty of Law. “And we show this effect is at least partly mediated by social comparison concerns.”

In the first of five studies, Garcia and Tor examined 2005 SAT scores at the state level, predicting that individuals in venues that had more test takers present would be less competitively motivated, and therefore have reduced scores, than those in smaller groups.

“We basically looked at how many people on average show up to take the SAT — what is the state average for the SAT,” says Garcia, Assistant Professor of Psychology at the University of Michigan. “What we found was that the more people who showed up on average at a particular venue in a state, the lower the average SAT score — even when controlling for other relevant factors such as parental income, ethnic identity, population density, as well as the percent of people who take the ACT and what their score on the ACT is.”

In a second study, Garcia and Tor recruited 74 undergraduate students to take a timed quiz as quickly as possible. Participants were told they were competing against either 10 or 100 other people, and those who finished in the top 20 percent of the group would receive $5. Garcia and Tor predicted that those participants who were told they were competing in the group of 10 people would be more competitive than those competing in the group of 100 and would have quicker completion times.

Even though participants had an equal chance of winning (20 percent in both groups) participants in the 10-person group completed the quiz significantly faster.

The researchers suggested that among a few competitors, people can experience or anticipate social-comparison concerns, which fuel motivation to compete. But as the number of competitors increases, social comparison diminishes, dampening competitive feelings.

Another contributing factor, according to Tor, could be the concept of expected payoff. “In the real world…when the group of competitors is larger, the payoff that you might expect to get, what economists call ‘expected payoff,’ goes down,” he says.

Offering the example of a primitive hunter-gatherer society, Tor explains that each hunter in a group of five chasing one rabbit will have a greater expected payoff than one who is competing for that rabbit with 20 hunters. It may be sensible for those in the group of 20 not to try as hard and conserve energy, because the odds of individual success are lower.

Even in the modern world, in many competitions, the larger the N, the lower the expected payoff, says Tor.

This concept is related to the social psychology theory of social loafing, says Garcia, in which individual motivation decreases on collective tasks involving many people. Anyone who has ever participated in a group project has in all likelihood experienced this phenomenon, in which they or other participants expend less effort than if the project were a solitary endeavor.

This concept of diffusion of responsibility was illustrated in a 1975 study of 11 waiters and their tips based on the size of the dining party. Though the average tip from 1,159 evening diners came out to 15.02 percent minus 9 cents, researchers found that the group size was a major factor. Individuals dining alone tipped almost 19 percent, while groups of five to six people tipped less than 13 percent. Responsibility was diffused amongst group members, resulting in lower tips on average (Freeman, Walker, Borden, & Latane, 1975).

Luck, Skill, and the Ratio Bias

One intriguing portion of Garcia and Tor’s timed quiz study is the fact that even though the odds of winning were mathematically the same, 20 percent in each group, participants perceived greater odds of winning in the smaller group.

This concept is referred to as the “ratio bias.” According to Garcia, their studies controlled for such beliefs, and participants still exhibited the N-effect whether or not they demonstrated ratio bias.

But, in a commentary in response to Garcia and Tor’s published findings, Kanchan Mukherjee and Robin M. Hogarth contested this theory, disputing the chances of success were constant.

Garcia and Tor “were saying essentially [that] being in the first two out of 10 was the same as being in the first 20 out of 100,” says Hogarth, ICREA Research Professor at Universitat Pompeu Fabra in Barcelona, Spain. “That turns out to be wrong if you’re standing equals abilities across a range of things.”

In their commentary, Mukherjee and Hogarth wrote that the core of their argument is “that people typically differ in ability and competitors therefore have different probabilities of success. Consequently, differential sampling variability in smaller and larger populations implies that the probability of a particular individual’s success depends on the number of competitors, even if the percentage of successful competitors is constant.”

According to Hogarth, both skill and luck play important roles in determining competitive motivation in groups.

Mukherjee and Hogarth determined that a smaller sized competition has a greater sampling error, which gives weaker contestants a chance of winning. People prefer smaller groups, says Hogarth, because an individual could be competing against someone who is comparatively weak. However, larger groups more closely approximate the distribution of skills in a population, making it increasingly unlikely that weaker players will win.

According to Hogarth, the N-effect is probably caused both by social comparison and luck. In their commentary, Hogarth and Mukherjee concluded that researchers of the N-effect should control for that fact that “even when competitions have the same percentage of winning entrants, individual probabilities of success are affected by the sizes of the different populations.”

In a response commentary to Hogarth and Mukherjee, Garcia and Tor showed that this theory was not borne out by their data, and that the manifestation of the N-effect cannot be explained by sampling error.

“It could be a matter of judgmental error,” says Tor. “Some people may simply think it’s going to be objectively harder to win in a very large group even if it isn’t harder in fact.” Yet he notes that “we observe the N-effect even where individuals tend to believe their odds of winning in a large group are not smaller.”

Using Competition to Your Advantage

Regardless of the contributing factors, the N-effect studies could have far-reaching implications, including informing the education class-size debate (the number of students per teacher) and challenging organizational design in business (small branches versus large centralized bases of operation, the design of work teams), according to Garcia and Tor.

However, given the current economic climate and steadily diminishing resources, is there a way to use knowledge of the N-effect and how individuals act in both large and small competitions to one’s advantage?

In Hogarth’s estimation, the N-effect study suggests “that when you’re competing, try and compete in small pools. In other words, when you’re going for jobs, there’s a double reason to try and go for jobs that not many other people are going for,” he says.

“As a rule of thumb, if in fact competition is between two small groups, like a group of 5 or a group of 20, go for the group of 5,” says Hogarth, citing greater sampling error that could work to an individual’s advantage. “If, on the other hand, it’s between two large groups of 200 and 500, it doesn’t much matter from our perspective. If both groups are sufficiently large, there wouldn’t be much sampling variability.”

Tor echoes this sentiment, explaining that “if an individual’s really trying to be motivated to try harder and perform as well as they can, then small Ns are beneficial.”

However, he reminds us that “this is a double-edged sword, because being more competitive can also be construed as being less cooperative.”