Touch is the first sense to develop, the most widely spread throughout the human body, and, as Joshua Ackerman suggested in his talk at an APS 23rd Annual Convention symposium, it is the scaffolding around which cognition is built.  And it remains a powerful, if frequently unconscious, force that changes the way we understand other people.

In a series of four experiments, Ackerman showed that heavier, rougher, or harder objects could change a subject’s experience of a social interaction.  Sitting on a hard chair while trying to buy a car, for instance, could make a subject perceive the salesman as a less flexible bargainer.  Looking at a résumé on a heavy clipboard could make its author seem like a weightier, more serious individual.  While the implications for applying for jobs and selling cars are clear, there’s a deeper message here: our sense of touch can impact our social mind in ways we can’t consciously perceive. 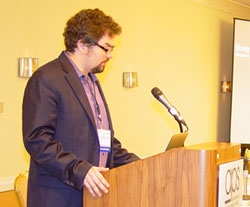 Eddie Harmon-Jones’ work uses brain imaging to show that a relationship exists between posture, interest and brain activity: showing pictures of cookies to subjects with a self-reported interest in cookies, he found that leaning forward can enhance the left frontal lobe activation, which is generally associated with interest.

Chen-Bo Zhong brought the symposium together by describing a series of experiments that link physical cleanliness and moral judgments. His work suggests that the foundations of our moral reasoning might be based in a sense of bodily cleanliness and contamination.

“A tension exists between the abstract and the embodied,” Zhong concluded. There’s a powerful bodily basis for cognition, and Ackerman, Harmon-Jones, Zhong and others are taking some exciting steps towards understanding these foundations.