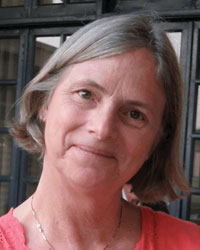 Whether a song prompts you to remember your first dance, or an annoying tune won’t stop buzzing around in your head, there is no doubt that music has unique effects on memory. APS Fellow Carol Krumhansl, a professor at Cornell University, studies this distinct connection. She took a few moments to speak with the Observer about her work as well as the upcoming theme program “Music, Mind, and Brain” at the 24th APS Annual Convention in Chicago, IL.

Memory is essential for making music meaningful. We hear the sounded events, not as disconnected units, but as wholes whose coherence depends on the way our prior experience knits together sounds. Musical emotion is considered to occur in moments when our expectations are violated, with the resolution delayed in artful ways. This creates waves of tension and relaxation that depends on our knowledge of musical structure acquired through past listenings. Memory also influences the way we conceive of the form of a piece of music through repetitions and variations of earlier themes, and shapes the unfolding of improvised music. Playing from memory is considered a standard of excellence in Western art music, and many cultures pass on their music through an aural tradition. Finally, music becomes part of our life’s story. For example, it plays a role in most significant ceremonial events, and reports of life-changing musical moments are not uncommon.

What is the most surprising thing you’ve learned through your research on music?

Perhaps the most surprising is the rich connections music research has forged to virtually every topic in psychology as well as a host of other disciplines in the sciences and humanities. Within experimental psychology, it became a distinct research subject in the early 1980s and now there are literally thousands of papers published every year in what has become a vibrant international and interdisciplinary research community.

In my own work, there have been some surprising twists and turns that have led me to different corners of the field. Early work with Roger Shepard resulted in an elegant geometric model of musical key relationships. Subsequent work uncovered general principles that guide melodic expectations cross-culturally and in more contemporary styles of Western music. Methods for exploring musical emotion by measuring the experience of tension and relaxation in real-time led me to a collaboration that established the psychological reality of highly theorized properties of music and a deep parallel between music and language.

What directions do you expect research on music and the brain to take in the future?

This is impossible to predict, only I can say that the remarkable expertise of music researchers points to a very bright future. The scope of the field continues to expand with significant collaborations across disciplines. Music in all its variety poses a myriad of questions concerning the development of musical capacities, its neural underpinnings, its evolutionary history, its relation to language, human creativity, how significant properties of music can be formalized within psychological theory, and social influences that shape music around the world. We look forward to presenting some of the current developments in the field in our symposium at the APS meeting in Chicago.

Your talk at the 24th APS Annual Convention is called “Five Decades of Top Hits: Memories are made of this…” That’s such an intriguing title — what will you be covering in your talk?

Recently, I have become fascinated with long-term memory for music. Very short segments are often recognized which means that a listener can match the fragment they hear with a memory that must contain extraordinary detail. An unexpected finding was that the college-aged participants actually preferred the music of five decades earlier. This is in contrast with previous research showing life-long preferences for music released during late adolescence and early adulthood. We are now following this up with participants in a study of the relationship between recognition, the feeling of reminiscence, and personal memories.