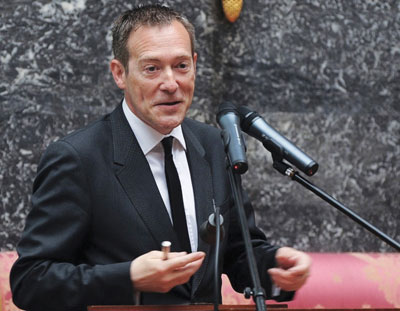 On the way home from the 14th Annual Meeting of the Association for the Scientific Study of Consciousness (ASSC) held in Toronto this past summer, I wondered how it can be the case today that we continue to think inside rather than outside of the box. The ASSC meetings, just like APS conventions, are profoundly interdisciplinary in nature. Each time I attend such an event I come out of it with a renewed sense that exposure to approaches different from one’s own is essential to being a creative thinker. Such cross-fertilization takes a lot of effort — an effort measured in years, if not decades, of collaborative chit-chat in the hallways of convention centers followed up by e-mail conversations, some of which eventually turn into profound novel insights. Thus, merely sticking an “interdisciplinary” label on any meeting that mixes up philosophers, psychologists, and neuroscientists won’t do it, and in fact, most of such events are disappointing. Genuine, engaged interdisciplinarity requires building communities that actively support, and ultimately depend on, continued, effortful dialogue among disciplines and sub-disciplines.

This leads me to wonder why it is the case, particularly in Europe, that so many relatively small-scale scientific societies, each corresponding to a specific subfield of psychology, continue to exist independently from each other. This fragmented character of psychology is not limited to scientific societies but extends all the way up to the scientific literature. One is often struck by how little subfield dialogue there is, for instance, between social psychology and cognitive psychology, both of which explore the same issues (say, the role of unconscious information processing in behavior) but from wholly independent perspectives.

The bewilderment I express here can probably be traced to the origins of our discipline. Thomas Scott (1991) upheld that “psychology lacks a clear identity.” This is certainly the impression one gets reading Robert Lundin (1979) who, in his opus Theories and Systems of Psychology, describes the emergence of psychology over the 20th century with retrospectively comical words that would perhaps best be used to describe how hunter-gatherers got together to form tribes:

“As psychology has evolved during the present century, different groups of people who called themselves psychologists have banded together to put forth communities of ideas and efforts designed to direct the way psychology should go. When a particular group shared similar ideas and opposed others, a ‘school’ of psychology was formed.” (p. 1)

The balkanization of psychology in separate subfields that Scott laments is nothing new. In 1949, on the occasion of the creation of the Belgian Society for Psychology, its main incipient, the famous Albert Michotte, wrote that

“It seems to me that it would be of interest to better know each other and to coordinate our efforts by creating opportunities for regular contact, which would make it possible for us to discuss either theoretical problems or professional questions, and, in a more general way, of anything that is relevant to professional psychologists” (Michotte, 1954, p. 1).

The diversity of approaches to the old and respectable problem of how the mind works comes as no surprise, given the complexity of exploring not only the intricacies of our mental life, but, more to the point, how the mind relates to the body and, in particular, to the brain. The brain is itself so complex that a neuroscientist can spend an entire career working on a single type of neuron. But this is not all, for neither body nor mind ever stands still. The brain changes when we grow up, and as we age. Further, as agents, we are in continuous interaction with the world and with other agents, to such an extent that one may reasonably claim it is meaningless to study psychological mechanisms without considering how they are modulated by the environment and by social factors.

Psychology is by nature a “hub” discipline, for its object of study is quite literally spread over several levels of description that span the entire spectrum of reality — from molecules to ecstasy. As Freud (1949) presciently noted,

“We know two kinds of things about what we call our psyche (or mental life): firstly, its bodily organ and scene of action, the brain (or nervous system) and, on the other hand, our acts of consciousness, which are immediate data and cannot be further explained by any sort of description. Everything that lies in between is unknown to us, and the data do not include any direct relation between these two terminal points of our knowledge. If it existed, it would at most afford an exact localization of the processes of consciousness and would give us no help towards understanding them.”

By some accounts at least, we have come a long way since then, and indeed both consciousness (as a singular problem) and brain imaging (as the best technology to bridge the gap between neural activity and mental life) now stand tall in the study of mind. Further, we have borrowed methods and ideas from a number of related disciplines — from the neurosciences to philosophy, and from economics to psychiatry, from biology to artificial intelligence — each in turn spawning interconnected fields that all have human beings at their core object of interest.

Unfortunately, more often than not, this multiplicity of approaches has proven detrimental to the psychological sciences, not only because their object is constantly under threat of appropriation by other disciplines, but also because of a lack of cogent dialogue within our own community. “Things appear to be changing in psychological science, however,” as Cacioppo (2007), then president of APS, remarked in an Observer column. And indeed they are. For someone who has been active in our field for about 25 years, it is remarkable to witness the emergence of entirely new fields such as social neuroscience, experimental psychopathology, or neuropsychoanalysis. Some such specialties bear a moniker that clearly reflects the ambition to be integrative, such as “developmental social cognitive neuroscience.” Almost all carry either a “neuro-” prefix or a “science” suffix, thus reflecting both enthusiasm in the face of the increased availability of entirely new tools to study the mind and perhaps also some preoccupation with granting the new subfields better status by describing them as “science” rather than as mere “psychology.” Make no mistake however: The mind is a messy affair, and just because we now have considerably better methods available to probe it, doesn’t mean that the mind will suddenly open itself up for inspection in newfound simplicity.

Cacioppo, in his 2007 Observer piece, showed an interesting graph delineating and structuring psychology and through which he distinguished between “levels of organization” on the one hand and “cross-cutting perspectives” on the other, carving up our science in subfields characterized both by their object of interest and by the method through which it was approached. Here is my own take at this attempt (Figure 1), not Frontiers’ tiered pyramid, but a Rubik’s cube of subfields defined by crossing three dimensions: Levels of Organization (Neuroscience, Cognitive Science, Social & Clinical Science), Methods (Observation, Experimentation & Modeling, Population Studies), and Perspectives (Normality, Change & Differences, Pathology). Of course, one may always quibble with specific choices in carving up a domain as complex as psychology. But it should be clear that Experimentation & Modeling includes brain imaging methods, and that fields such as animal psychology are subsumed in the Change & Differences perspective whenever the main concern is to understand the human mind by comparing it with other minds. Further, perhaps computational modeling should stand as a method of its own rather than being grouped as depicted with experimentation. Likewise, perhaps clinical psychology, some aspects of which are often grouped with social psychology, would perhaps best stand on its own as well.

But you get the idea. The resulting cube, which contains 27 subfields, satisfyingly produces many of the expected specialties. For instance, crossing Cognitive Science with Experimentation & Modeling and Pathology gives us psychopathology. Crossing Social & Clinical Science with Population Studies and Normality gives us quantitative psychology. Not all specialties can be confined to one little cube. Rather, some can span several because of their own interdisciplinary nature. For instance, evolutionary psychology, although squarely focused on Change & Differences as its central perspective, can clearly interest different levels of organization. Likewise, some fundamental issues, such as the status of computational models or the nature of scientific knowledge, are of universal concern for the psychological sciences and are perhaps best seen as forming the background against which our cube is depicted.

The singular “Grand Challenge” for the psychological sciences, as they blossom in the 21st century is  integration. Not only is it high time that we start speaking to each other, but doing so is absolutely essential for psychology to thrive as a discipline. Indeed, everybody else feels like a psychologist today. Even physicists sometimes feel they have better answers than we do to particularly hard problems such as consciousness. But it takes considerable wits to design interesting psychology experiments, and this is not something that comes cheap. As one famous pioneer in neuroimaging methods once confessed to me, “The most interesting part of any neuroimaging study is the behavioral paradigm.” Designing such experiments is what psychologists do best, and I am convinced that excellence in experimental design and behavioral methods will remain the greatest strength of psychology in the future.

The Rubik’s cube of psychology depicted in Figure 1 needs to be set right! But perhaps not in the way a real Rubik’s cube is set right — that is, by attempting to obtain uniformly colored surfaces. Instead, the psychology version would be set right by twisting and turning it in such a way that each face contains as many different colors as possible, so fostering fecund conjunctions where the colors blend at the seams. For, this appears to be the only way forward in psychology, just as it is true that it makes little sense to speak of pathological states in the face of disagreement about what is normal, just as it is true that the inductive reasoning fostered by observation should be followed by the deductive reasoning made possible by experimentation, and just as it is true that cognition can only be understood in the social context in which information processing takes place.

Now is the time to expand our thinking and cast our conceptual nets in a way that is relevant to psychology as a whole. Instead of having each of us retreat to his or her own little space of our cube, we should instead strive to expand our reach so as to make psychology fully assume its role as a modern “hub” discipline, a discipline through which humans can be understood in their full complexity, from individual differences to social trends, from neurons to emotions. This is no simple task; it is indeed a “grand challenge,” one that APS is busy taking on by fostering the stronger connections among subspecialties in Europe and the United States.

This initiative, undertaken by a group of representatives from different subfields of psychology and the neurosciences in Europe collectively known at the “Paris group” (see “European Federations and APS Unite to Advance Psychological Science” from the September 2009 Observer), will hopefully soon result in the increased interactions and collective thinking we so clearly need — not just here (wherever that may be), but everywhere! ♦

Axel Cleereman is a Research Director with the National Fund for Scientific Research (Belgium). He is past-president of the Belgian Association for Psychological Sciences and president of the European Society for Cognitive Psychology

Research suggests that certain stimuli – specifically, your own face – can influence how you respond without you being aware of it. More

A sample of research exploring competition and inequality, religiosity and trust, differences between visual memories and visual perception, and confidence and information seeking. More