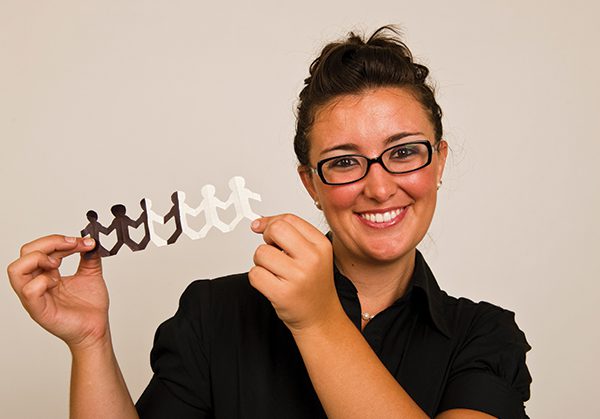 Sarah Gaither, Duke University, shares how her experiences as a biracial individual have informed her psychological research on identity.

In recent work, you’ve found that “identity flexibility” has potential benefits. Can you tell us about that?

In a paper coauthored with Jessica Remedios, Diana Sanchez, and Samuel Sommers, we show that simply reminding multiracial individuals (those with parents from different racial or ethnic backgrounds) about their multiple racial identities leads to increased problem-solving abilities associated with more creativity. And we see a very similar effect for monoracial individuals (those whose parents are the same racial/ethnic background) when we remind them about their multiple social identities, such as being a student, a female, and a friend.

More recently, in collaboration with Katherine Kinzler and Samantha Fan, we have replicated these effects in 6- to 7-year-old children. We found that asking them to consider their own multiple identities compared with thinking about the identities of others also boosts their creative thinking and increases how flexibly they see social categories.

To date, most psychology identity work has used singular identity frameworks, but it is obvious that we all have multiple identities (gender, race, age, sexual orientation, career, hobbies, etc.). So by studying groups who have more naturally salient multiple identities such as those who are multiracial, my work is beginning to highlight some of the potential benefits that stem from us being able to think about ourselves in more flexible ways. In other words, I argue we all have the potential to think more flexibly when thinking outside of our fixed social boxes. Some groups may just have more practice or experience with this perspective.

How does the university environment shape our thinking about diversity and identity?

My graduate work at Tufts University showed that White students living with an other-race roommate tend to have a more diverse friend network, positive shifts in their racial identity, and less stressful future interracial interactions at the end of their first year of college.

At Duke, I am in the process of trying to replicate these findings, but will also be looking at these outcomes for different types of minority students inclusive of race, religion, and sexual orientation. With a grant from The Spencer Foundation, we will be looking at both a first-year cohort and a fourth-year cohort of students to explore how contact with various types of diversity shifts racial and cultural attitudes and friend networks and how diversity exposure also may boost problem-solving skills reflective in academic outcomes.

The college dormitory and campus are largely underutilized research contexts reflective of many types of cross-group contact. Combined with the fact that the first year of college in particular marks a very important identity transition period for young adults, I am excited to continue studying how the college environment may shift attitudes and behavior.

Intergroup contact is often seen as a way of reducing stereotyping and prejudice. Are there times when it can have unintended consequences?

Intergroup contact theory argues that contact and exposure to those who are different should shift our attitudes. Usually, this theory focuses on positive changes in social perceptions, but negative contact with an outgroup member also can equally lead to increased negative beliefs about members of that group. Findings in the field regarding how much and what types of contact are considered optimal or meaningful remain mixed, and I am hoping my work looking at different types of outgroup contact on college campuses can help shed light on some of these nuances in the literature.

You’ve mentioned that you’re a ‘me-searcher’ — how does this influence your research process?

Growing up as a biracial Black/White individual who outwardly looks White has made me hyper aware about the role that one’s visible versus invisible identities play in shaping our own behavior and how we may be perceived by others. Seeing firsthand how differently my White mother and my Black father — and even my more racially ambiguous biracial brother — are treated has directly influenced my interests in cross-group interactions, racial ambiguity, and identity denial experiences.

Being biracial and growing up in a mixed-race family, combined with the fact that I have lived in northern and southern California, Boston, and Chicago, and now Durham, has shown me how malleable and flexible one’s own identities and perceptions of those identities are in US society.

You are a psychological scientist, a university professor, a mentor — what other identities are important to you?

As I have said, acknowledging our multiple identities is something we all should be doing! So in addition to being a scientist, professor, and mentor, some of my other important identities are being: a biracial person, a female, a daughter, a sister, a wife, a friend, and an advocate. I also strongly identify as a foodie!

What are some of the burning questions you hope to tackle next?

There are so many directions that my work is taking right now, but I am especially excited about extending some of my work focusing on biracial experiences to explore some of the potential health consequences that stem from continual social exclusion. In particular, I would love to determine whether there is an intervention or set of coping skills we can identify to help improve biracial life outcomes. My work also is beginning to look more at cross-cultural perceptions in racially ambiguous categorizations, which also should help push discussions of generalizability. In addition, I am really interested in expanding my research to look at gender-identity denial experiences and how those may compare behaviorally with experiences of racial-identity denial  to help broaden the scope of my identity research.

Back Page: Decades of Dolphins

Janet Mann, a professor of psychology and biology at Georgetown University, dives deep into the social lives of these clever marine mammals. More