The Impact of Childhood Trauma 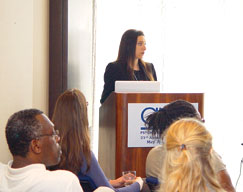 There are many people who experience traumatizing events who do not develop post-traumatic stress disorder (PTSD). But does that mean that their mental health is not affected at all? Four researchers came together on Symposia Sunday at the APS 23rd Annual Convention to discuss how childhood trauma can affect neurocognitive functioning in early and late adulthood.

Trauma affects the brain region called the hippocampus. Because prior studies have linked PTSD to small hippocampal volume (HV), Shireen Sindi, a researcher from McGill University, investigated the connection between HV and trauma in young adults and older adults without PTSD. Shindi found that young adults who reported more trauma symptoms tended to have a smaller HV, but she did not find any significant correlations in older adults.

Two psychological scientists — Felicia Gould, University of Miami, and Sandra Donnay, Fordham University — discussed how child abuse could affect people later in life. In Gould’s study, volunteers who did or did not experience disorder in their childhood were given a battery of cognitive tests.

“The tests where we see a relative deficit compared to controls were visual memory, executive function, set shifting, an executive function measure for planning, and spatial working memory as well,” said Gould.

Donnay’s investigation examined how physical abuse could affect cognitive aging in older adults. Her analysis showed that maternal physical abuse resulted in reduced performance on certain cognitive tests. For example, participants who endured this abuse had reductions in their declarative memory. “Even in the absence of PTSD, cognitive consequences were apparent,” said Donnay.

Research done by Daniela Jopp, Fordham University, looks specifically at the effects of childhood experiences of war on cognitive functioning in old age. Using data from a group of older individuals who experienced World War II in Europe, Jopp analyzed how the participants performed in tests ranging from word recall to picture completion. Overall, there was no significant connection between total war-related events and cognitive functioning. But Jopp did find a small trend indicating that individuals who experienced bombardment performed less well on certain tests.

All these studies showed there are aftereffects of trauma besides PTSD. The findings will contribute to a better understanding of the long-term effects of childhood trauma and may lead to better treatments for survivors.

During psychological science’s infancy, a prime interest for many researchers was consciousness and inner experience — what happens in our heads on a moment-to-moment basis, as accessed by introspection. But by the mid-1920s, introspection went out of fashion, and it wasn’t until recent decades that it regained some of its respectability.

The problem is that inner experience is notoriously difficult to study. Laboratory studies can’t get at what people are thinking about in their real lives (i.e., ecological validity), and diary studies and questionnaires that attempt to capture experiences are less “thin sliced” than would be ideal to get at people’s evanescent mental lives.

The first speaker at Sunday’s symposium “Inner Experience: It’s Not What You Think,” Christopher L. Heavey, University of Nevada, Las Vegas, described a new, and promising method for studying inner experience called descriptive experience sampling, which has resulted in surprising findings about our inner worlds and how different groups of people differ in their moment-to-moment thoughts.

An Overview of Latent (Growth) Curve

Withholding the Socially Undesirable: The Cases of Anger, Sexuality, and Sexual Orientation

The Dark Side of Mentoring

The Psychobiology of Prosocial Behavior

Craving and Consciousness: Theory, Data and

Memory Consolidation and Structure in

On Neurons, Hearts, and Social Behavior:

An Evaluation of a Media-Based Intervention for

Affective and Cognitive Processes in Health

In descriptive experience sampling, participants are given beepers and are randomly signaled numerous times over the space of roughly a week. At each beep, they jot notes on what was going on in their minds in the last undisturbed moment before the beep. They are interviewed about the experience they are   as soon as possible — always within 24 hours and often less — to minimize introspection and loss of memory. This sampling is repeated over multiple days. The initial reports for each volunteer are discarded because participants aren’t used to examining their inner experience in this way and have to learn to overcome their presuppositions about what they should be experiencing.

From their studies using this method, Heavey and his colleagues have identified five broad categories of inner experience: inner speaking, inner seeing, unsymbolized thinking (thought that doesn’t take the form of pictures or words), sensory awareness (being absorbed in aspects of the environment such as sounds or the colors of objects), and feelings.

They have found that people’s thin-sliced inner experience seldom corresponds to what people ordinarily think they experience or to the experiences reported in other methods, such as daily diaries or questionnaires. For example, depressed people say they feel down or sad mostly every day, but random sampling doesn’t find depression actually present in most moments of experience.

Left-handed people report almost no inner speech or words, for example. A right hander looking at a word on a blackboard will be more likely to see the word as well as sensory aspects such as the color of the chalk. Left handers tend to focus mainly on the color, not the word itself. And whereas right handers think about activities they are performing, left handers tend to be focused on “concentrated doing” — that is, they are concerned less about currently performed actions and more about whether those actions are being done correctly.

Various clinical populations also show interesting peculiarities in their inner experiences. It would be expected that the dominant inner experience of people with eating disorders would include preoccupations with body shape and feeling fat. But the method used by the researchers reveled a strong pattern in these participants of what Hurlburt called “fragmented multiplicity” — multiple inner trains of speech, for example, as well as memories and other images. Even more interesting, the researchers found that this fragmentation of experience preceded and predicted episodes of purging, and that the inner experience of bulimics became less fragmented after purging.

It is expected and widely thought that the inner experience of people with OCD is dominated by obsessive thoughts. But the descriptive experience sampling method shows that commonly used questionnaire methods — and the beliefs of the individuals themselves — do not accurately capture inner experience. People with OCD, the researchers found, actually typically report no inner experience at all. This lack, or at least the inability to report it, is itself a fascinating discovery not only for the researchers but also for the participants, who learn that they have been deceiving themselves about their experience.

The benefits of the method are not limited to the gathering of interesting data. Heavey noted that participants in their studies seldom drop out, because they really enjoy it — appreciating both the interest of the experimenters and the insight they gain about themselves and their actual inner worlds in the process. Hurlburt added that many participants reported the experience as being better than any psychotherapy they have undergone, raising the possibility of testing the method as a clinical intervention.

Using Neuroscience to Tease out Individual Differences in Moral Judgment 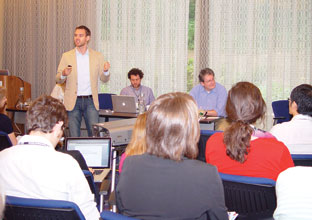 Morality is different for everyone. For example, Spain gave human rights to chimps in 2007, while other governments continue to hand out licenses for hunting seal pups. On Symposia Sunday at the APS 23rd Annual Convention, three researchers discussed their efforts to investigate individual variation in morality.

One way to account for differences in morality is genetics. Abigail Marsh, Georgetown University, shared her results from a study in which her team correlated genetic alleles for a serotonin transporter called SLC6A4 with participants’ responses to moral dilemmas with various outcomes. Ultimately, individuals who were homozygous for the long allele of the gene found the “foreseen harm” scenarios to be more acceptable than did individuals who were homozygous for the short allele. In other words, individuals with the short allele thought it was less acceptable to passively hurt an innocent person (e.g., allow a boulder to run over a person) even if it saved more people.

Another potential source of variation is the mind, or mind perception, as Kurt Gray, University of Maryland, puts it. “Mind is a matter of perception,” says Gray. “Because we can’t directly experience another person’s mind, we have to infer it.” Gray showed results from a study in which participants were asked about the “minds” of individuals such as an adult woman, a baby or Superman, as well as other entities such as animals, God, or a dead person. According to Gray, participants were more likely to categorize babies and animals as having “less responsible” minds than adults.

Brain activity could also help parse out differences in morality. Joshua Greene from Harvard University shared data from an fMRI study in which people were given the opportunity to lie about the results of a coin flipping test. After sorting the participants into “dishonest,” “honest,” and “ambiguous” categories, Greene showed that dishonest participants had distinct activation in the control system of their brains when they chose to lie. In contrast, honest people didn’t have a specific activity pattern, which suggests that honest people do not struggle with temptation when they are given an opportunity to lie.

Overall, there’s no single part of the brain that scientists can point to as the source of a person’s conscience or moral reasoning. Morality is complex and messy, but these scientists are hoping that over time, they can sort it out. 