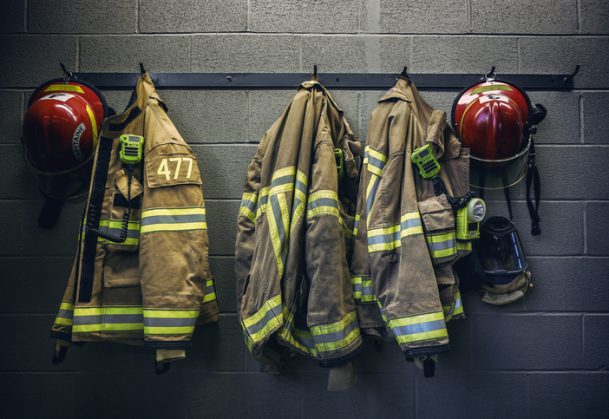 The National Institute of Standards and Technology’s (NIST) Public Safety Communications Research Division has announced the winner of its 2019 Haptic Interfaces for Public Safety Challenge—and psychological science plays a central role in the winning team’s work.

Haptic interfaces are systems that allow humans to use movement and sensation to interact with computers. NIST’s Haptic Interfaces for Public Safety Challenge invites applicants to develop haptic-interface prototypes that will help firefighters and other first responders navigate the dangers of their environments. In 2019, the challenge required haptic developers, technology providers, and scientists to create prototypes that firefighters could use to navigate through thick smoke and other hazardous conditions in which visual and audio channels are compromised. Judges tested each prototype while wearing 50 pounds of gear, simulating conditions in the field. Prototypes were also tested through virtual-reality simulations.

A team from Carnegie Mellon led by Yang Cai, and featuring APS Past Treasurer Roberta Klatzky, took home first prize at the competition, winning an award of $25,000 as well as additional recognition for being the most commercially promising development. Klatzky, the Charles J. Queenan, Jr. University Professor of Psychology at Carnegie Mellon and a 2019 recipient of the APS James McKeen Cattell Fellow Award, is also a professor at the Human-Computer Interaction Institute at the Carnegie Mellon Neuroscience Institute, where she studies perception and spatial thinking.

“[Klatzky’s] vast experience in haptics and navigation provided critical information for the navigation approach used during the live trials at the firefighter testing facility,” noted NIST in its announcement of the winning team.

Klatzky and team’s winning design was a band that attached to firefighters’ helmet. The band is embedded with haptic actuators that deliver a left, right, forward, or backward directional signal to the wearer.

“The project led by Yang and colleagues hit my sweet spots as a psychological science researcher,” Klatzky said. The goal of the project “was to guide first responders by providing vibratory stimulation at various points around a helmet. Haptic signals were necessary, because the responders might find themselves in smoky and noisy environments.”

Klatzky added that she has spent much of her career “conducting research on haptic perception and sensory-guided navigation, enabling me to contribute to the design of the hardware and provide guidelines for its use in navigation.”

Klatzky and colleagues’ winning design is an excellent example of the many potential practical applications of psychological science.

APS supports the National Science Foundation for the Future Act, which would dramatically increase the scope of NSF research and education efforts. More

NIH-Funded Opportunities to Address Application of Artificial Intelligence to Health

To propel the adoption and application of artificial intelligence (AI), the National Institutes of Health (NIH) is introducing the Bridge to Artificial Intelligence (Bridge2AI) program. More

The initiative, called UNITE, aims to understand and address racism in the broader scientific community and more specifically in NIH-supported work. APS’s comments, informed by psychological science, echo the value of improving inclusivity and diversity in science. More