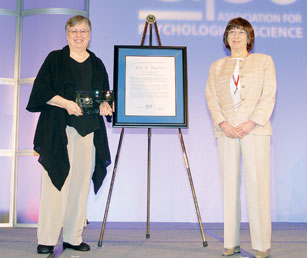 Our ability to recognize faces is something we take for granted, but it is actually quite an extraordinary talent, considering the thousands of people we can instantly identify, ranging from our parents to “the guy who was in a few episodes of that TV show I like.” The structures in the brain that are responsible for our mental “facebook” are still somewhat mysterious, and when these structures are damaged, treatment, if at all possible, can be something of a guessing game. Leslie G. Ungerleider, a leading researcher in the field of face recognition at the National Institute of Mental Health (NIMH), delved into some of these mysteries in her William James Fellow Award Address at the APS 22nd Annual Convention in Boston. Ungerleider’s 30-year body of work “essentially reinvented her area of research” said presenter Richard Nakamura, an NIMH colleague and currently Scientific Director of the institute.

Ungerleider’s work has focused mainly on the face processing regions in the primate brain, which are found in the ventral temporal cortex (VTC), prefrontal cortex (PFC), and the amygdala. She further narrowed down the precise areas within these regions involved in facial recognition using fMRI scans of monkeys viewing faces and nonface objects and more closely examined the relationships between them (i.e., which areas show correlated activity). In further studies, Ungerleider noted the strong corresponding activity in the VTC and amygdala when viewing emotional faces versus neutral faces, which led her to hypothesize that the amygdala could be the source of emotional modulatory feedback to the VTC. She tested this by examining the fMRI activity of monkeys with complete or partial lesions of the amygdala as they viewed neutral (emotionless) faces or faces showing strong emotions such as fear, anger, or appeasement. Her results confirmed the hypothesis, as monkeys with amygdalar lesions showed little or no modulation of activity in the VTC (depending on whether the lesion was partial or total) when viewing emotional faces but showed normal VTC activity when viewing neutral faces.

Ungerleider’s newest studies center on the human facial recognition system. She is studying men and women suffering from congenital prosopagnosia (or “face blindness”), a disorder in which facial recognition is seriously impaired or even nonexistent. Prosopagnosia exists in 2 percent of the population (Jane Goodall is a famous example), and those with the condition are forced to use nonface cues (such as the sound of a voice) to identify even close relations. In her award address, Ungerleider related a story told by one of her subjects, who would sometimes find herself unable to identify her daughter at daycare if the daycare provider had changed her clothes at some point during the day.

In these new studies (with data that still need to be completely analyzed), Ungerleider examined fMRI scans of control subjects and congenital prosopagnosia victims to determine if the facial recognition network exists at all in those with the disorder and/or which parts of it were malfunctioning. The scans of subjects with prosopagnosia were fairly similar to scans of the control group, except for increased activity in the PFC and a total lack of activity in the anterior temporal lobe. This absence of activation is consistent with evidence showing that those with prosopagnosia have reduced inferior longitudinal fasiculus fibers, a fiber bundle that connects core face processing regions (in the occipital and fusiform face areas) with anterior temporal lobe regions. Future research will more closely examine this “bad connection” and determine whether it is a factor or a root cause of congenital prosopagnosia.

In closing, Ungerleider acknowledged her lab and all those who have aided her research and ended with a final slide tracing her psychological “lineage” all the way back to her scientific great, great, great grandfather, William James — a face everyone in the audience could easily recognize. ♦