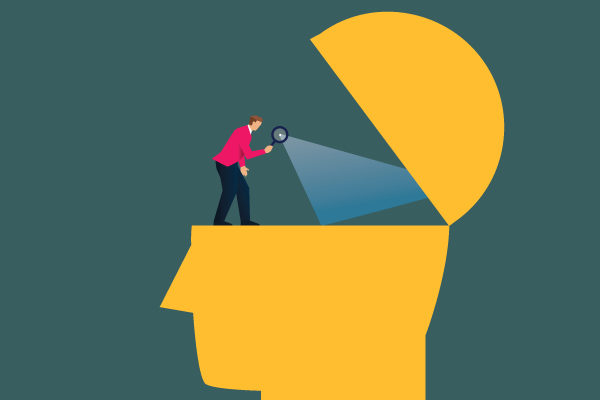 Nathan S. Rose, assistant professor of psychology at the University of Notre Dame, uses neuroimaging and neurostimulation techniques to study memory and aging in healthy adults and patients with Alzheimer’s disease, Parkinson’s disease, and amnesia.

What led to your interest in using the tools of neuroscience to advance psychological science?

This has always been my interest. I’m first informed as a cognitive psychologist who’s interested in both basic and applied aspects of memory. A lot of my working memory research is on basic memory processes and the neurocognitive mechanisms that support them. How do the mind and brain actively retain information in preparation for prospective actions and future goals? In particular, how we can get information back in mind after it has left the focus of attention? Imagine you’re in a cocktail party, you meet a new person, then a few other new people, and when you try to remember the first person’s name you can’t; that information is still in your central nervous system somewhere, but you just can’t retrieve it.

Decoding analyses of neuroimaging data using multivariate pattern classification is what really drew me to the use of neuroimaging. The application of artificial intelligence algorithms to decode stimulus categories and features, which reflect the mental representations of interest, gets us closer to understanding those representations.

And that’s what I’m really interested in. So, now it’s not only doing transcranial magnetic stimulation (TMS) with electroencephalogram (EEG), it’s doing TMS with EEG decoding, in which the AI algorithms can learn to discriminate patterns in the neural data, including different activation states. For example, the algorithms can distinguish the different patterns of brain activity that occur when someone is thinking about a face, or a word, or a motion. This goes far beyond what we can learn using only behavioral measures or even imaging techniques without decoding analyses.

What challenges have you encountered using neuroimaging techniques?

I remember in grad school learning about things like TMS, which was typically used as a virtual “lesion tool,” and thinking it sounded bizarre and scary. During my postdoc at the Rotman Research Center at Baycrest Hospital in Toronto, I was primarily focused on learning and doing fMRI and EEG, but there was a TMS machine at Rotman. Toward the end of my postdoc, another postdoc who did have experience with TMS came to Rothman and wanted to put an experiment together, so that was the first time I saw TMS in action. I had it done to myself and did it to other people. The fact that you can place the TMS coil on the head over motor cortex and make your thumb twitch really gives reinforces the notion that we are “made of wires” and the brain controls everything. The more I got exposed to it, the more I realized how minimally invasive it was.

When I started my second postdoc at the Postle Lab at the University of Wisconsin–Madison, I was very intrigued by Jarrod Lewis-Peacock and Bradley Postle’s findings with brain decoding analysis, showing that when attention moves away from an item you were holding in working memory, the item appears to have been forgotten. I had the idea of using TMS not as a “virtual lesion” tool but as a probe and record tool, where you ping the brain to probe its state and see what it’s doing at that point in time by measuring its response, for example—by simultaneously recording EEG. When I started at Notre Dame, it wasn’t easy to set up TMS. It still sounds like a bizarre tool to many people.

With noninvasive brain stimulation studies, there are so many things that can be manipulated, many “physics things,” and as it is a relatively new area, there are many studies that don’t show effects and not necessarily because they were poorly designed. And these studies should be published because the field can learn from them. I’ve been using transcranial electric stimulation, specifically transcranial direct current stimulation (tDCS), and have only gotten null effects. So, I moved away from that form of noninvasive brain stimulation, but other researchers have had success with it, albeit there seem to be a lot of different variables and parameters that can be manipulated and will probably take a long time to get them mapped. This is also true for TMS.

What about your work with patients?

Lately, I’ve been focusing more on healthy older adults, but I’ve also been working on an Alzheimer’s biomarkers study, using data from a longitudinal study by Cindy Bergeman’s Adult Development & Aging Lab, which has been tracking approximately 1,000 people for over 15 years. The original study is about exposure and psychological and physical reactivity to daily stressors and, when I came to Notre Dame, I suggested adding a neuropsychological measure to try to predict, using the prior data, who is likely to get mild cognitive impairment, Alzheimer’s disease or a related dementia. In a new pilot study, we’re also adding measures of brain structure and function and blood-based tests that can show the presence of Alzheimer’s disease biomarkers. Through this collaboration, I’ve been doing some sort of clinical research. But collaboration can be difficult because, as a junior scientist in a tenure-track position, you are required to demonstrate scientific independence. This prevented collaboration with people I had worked with before and my mentors, who are some of the best people, with the best labs and tools, doing this type of research. So, I’ve been mostly focusing on collecting data in my lab with my students and trainees and helping them to get their research published.

How has the pandemic affected your work?

We have to do MRI, EEG, and TMS in person, with older adults, who are a vulnerable population. So, we had to stop. I worked three years to get this NSF grant and when we started, the pandemic came and we’ve been pretty much prevented from doing the research. Meanwhile, I still have to support trainees and use grant funds. Like everyone else, we’ve been concerned and trying to work with administrators. A workaround for this has been to work on preregistering a study—getting the design and hypotheses preregistered and getting it through the revision process before we actually conduct it, as this is a very complex study, including TMS, EEG, and fMRI measures.

What advice would you offer to early-career psychological researchers considering a career in the neuroscience field?

Learn how to program! This skill is very important for collecting and working with neuroimaging data.

Decide what you’re interested in, ask good, theoretically driven research questions, and choose the neuroscience techniques that will help you answer the questions. If you start by choosing and learning only one technique, it can end up narrowing down the questions you ask because of the type of measure you know you can obtain with that technique.

I’m really interested in figuring out how memory works and I’ll use any tool that is available to me that will help me answer my research questions. Depending on the research question, there are different methods that are better suited to provide answers. I can’t say that I would advocate for this approach but I have been almost “forced” into learning different tools and techniques to help me address the research questions I’m interested in. It makes it really hard because you want to work with each technique long enough to become an expert in it. Of course, team-based science and collaboration can help, so experts with different skill sets can work together.

The active representation of an item in WM drops to baseline when attention shifts away, but transcranial magnetic stimulation can produce a brief reemergence of the item in concurrently measured brain activity. This reactivation effect only occurs and influences memory performance when the item is potentially relevant, suggesting that the representation is dynamic and modifiable via cognitive control.

What are your plans for the future?

In my 2020 article in Current Directions in Psychological Science, I present a conceptual model of working memory. Evidence from TMS and neuroimaging indicates that working memory depends on both sustained and transient or periodic neurocognitive processes that vary greatly by context. This is not a formal quantitative model though; I hope that computational modelers will read this and related articles and start developing actual computational models to test these ideas.

The TMS-induced reactivation effect is complex, and we still have so much to learn about it. Right now, I’m interested in figuring out if it can occur in older adults. If not, is it because of some sort of aberrant short-term synaptic plasticity mechanism, which may be a fundamental source of age-related differences in the consolidation of memories. I’m also interested in the basic science of finding out where in the brain these processes are occurring. But if we can use TMS in older adults as a tool to reactivate volatile latent memories that may have been forgotten or be in the process of being forgotten, perhaps we can use TMS to create better interventions to enhance episodic memory in healthy older adults and patients with memory impairments.

Feedback on this article? Email apsobserver@psychologicalscience.org.