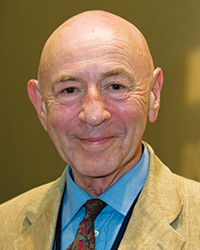 APS Past President Walter Mischel’s studies on children’s self-control are classics in the field of psychological research, and he’ll reflect on his storied career and other aspects of his life for an Inside the Psychologist’s Studio interview on March 24, 2017.

Mischel will be interviewed for the APS video series by APS Past President Mahzarin R. Banaji during the International Convention of Psychological Science (ICPS) in Vienna, Austria. The event, which will draw researchers from around the world, will showcase the latest developments in integrative science — research that draws broadly from multiple levels of analysis and in multiple branches of psychological science and other disciplines. ICPS runs from March 23–25. Mischel is cochair, with APS Secretary Gün R. Semin, of the Steering Committee for the Integrative Science Initiative, of which ICPS is a part.