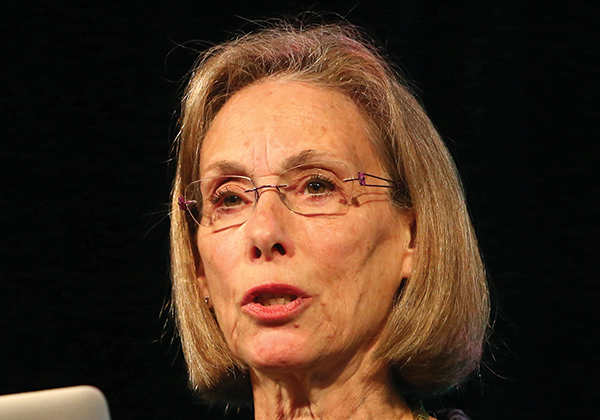 From the Whorfian Hypothesis — the idea that the language you speak may cause you to think about the world in unique ways — to the theory that discovering any language at all causes a radical transformation of thought, psychological scientists have been studying the ways in which language shapes learning for decades. But, says APS William James Fellow Barbara Landau (Johns Hopkins University), both of these theories have their flaws — and she’s proposing a third theory to counter them.

“Some of our information comes from exploring the world either visually, or haptically if we’re blind — but some information and some knowledge comes specifically from the mind itself,” said Landau, who has studied blind children to determine how they learn about the world, at her award address at the 2018 APS Convention in San Francisco. In the past, philosophers such as John Locke had suggested that “if you don’t have sensory input to feed a lexical concept or a word for that concept, then you will never develop them,” she added, but that notion simply hasn’t held up.

In studies with APS Fellow Lila R. Gleitman, for example, Landau found that congenitally blind children could still acquire the words “see” and “look” and the concepts that underlie them, despite not having firsthand knowledge of them. When told to “look up,” these children reached up with their hands, exploring the space above them in a similar way to their sighted counterparts, who turned their heads upward to do the same thing even when blindfolded. Thus, while it’s clear that some knowledge is visually obtained, it’s equally obvious some is absorbed via other avenues, she said.

With this in mind, one of Landau’s main questions across her decades of language research has been: Does language change thought? In attempting to answer this query, Landau has gleaned insights from other theories — most notably the aforementioned Whorfian Hypothesis and the “radical transformation” hypothesis — while still finding them lacking.

The Whorfian Hypothesis, put forth by Edward Sapir and Benjamin Lee Whorf, suggests that learning a particular language (language A vs. language B) affects the way you think. As an example, Landau cited an experiment in which participants who spoke different languages were shown several patches of color with one outlier and asked to find the outlier. The outlier was either a different shade of the same color (green vs. lighter green; within-category) or a different but similar color (green vs. blue; between-category), and the colors were projected to each visual field separately. The experimenters hypothesized that between-category identification would be faster for people who spoke languages that had verbal distinctions between the two colors than for those who did not.

As Landau explained, “Languages tend to cut up the space of colors in very different ways across different languages … the idea here is that learning a particular language shapes nonlinguistic categories in accord with native language distinctions.” And indeed, between-category identification was found to be faster among those who spoke languages that made the verbal distinction, but only when the colors were presented to the left brain hemisphere — the hemisphere where language usually is processed. Thus, according to the study authors, “Language may affect perceptual discrimination.”

Another approach to language learning is the notion that having any language at all radically shapes thought processes. Researchers studying spatial orientation, including Kenneth Cheng and APS Past President C. R. Gallistel, have found, for example, that if you put a rat in a room and give it a food reward, then disorient it, then put it back in the room, it will sometimes go to the place where it received the reward but also will sometimes go to the geometrically equivalent place with no food (that is, directly across from to the food-reward site). With no language, rats rely entirely on the geometry of the surrounding space, often ignoring other salient cues.

Replicating these experiments with children and toys, psychological scientists including Linda Hermer and APS William James Fellow Elizabeth Spelke have found a similar phenomenon in children 18 to 24 months old, with the youngest children behaving the most like rats. Older children with language abilities, however, are more able to locate the correct reward site. “Why does a young child — a toddler — act just like a rat, but a 4-to-6-year-old acts like an adult — that is, they can combine the geometry with the landmarks [of the room]?” Landau asked. The answer, according to Hermer, Spelke, and colleagues, is that “It’s language itself — having a language — that is causing the difference between the rat and the human.”

While both of these approaches to the intersections of language, learning, and cognition have valuable insights to offer, said Landau, they also each present “critical weaknesses.” The argument that a specific language shapes thought is problematic, she said, because it’s unclear what is being shaped — could it be perception or memory rather than thought itself? In addition, language is used implicitly in nonlinguistic tasks (e.g., instructions, responses), which makes it difficult to code for more nuanced nonverbal responses. The proposition that any language radically transforms thought is incomplete, Landau noted, because the mechanism is unspecified. It’s clear that language is not necessary for all thought —so what, exactly, is it necessary for?

Landau’s answer to these queries is encapsulated in the recoding hypothesis: “Language provides a rich formalism which in itself confers an advantage for cognition,” she said. “What it means to have a language is to have a formalism that really matters when you’re encoding your experience … language recodes what we see.”

To further this hypothesis, Landau and colleagues conducted a case study with several variations. To start, they showed 4-year-old children a half-red, half-green block of color, removed it for a second, then presented three similar blocks — the same block, a reflection, or a diagonal split — and asked the children to pick out what they had just seen.

Landau also had the children perform a task to show whether they could identify top versus bottom (95% could) and left versus right (between 0 and 80% could). She theorized that, since the “left” condition produced the most correct results, those children who knew their directions would do best on the color task. But that wasn’t the case.

“If you know your lefts and rights — if you have a long-term representation of these things and you just bring it to bear in the task — then kids who do better on ‘left/right’ should also do better in the matching task,” she explained. “That turns out not to be true … What this means to us is that they don’t actually have a long-term representation of these terms that they’re bringing to bear, but they’re able to use it right in the moment when we say to them, ‘Red is to the left of green.’”

To see whether this might work in a more relatable setting, Landau replicated the experiment with more comparative words (e.g., “Look at this! The red is prettier/nicer/lighter/brighter than the green.”). The results held steady at 78.8% — almost as accurate as those of the “left” condition. “This asymmetrical concept — prettier — actually works for 4-year-olds to carry over the binding of the color location in this very local context,” she explained.

It’s clear from these experiments, Landau said, that language does enhance thought in the moment; it’s just a temporary change. “Language can recode via a powerful formalism,” she explained. “The effects are momentary and become more automatic early in development. They confer advantage for cognition more generally.”  –Mariko Hewer