Observer > 2012 > September > Knowing Others and Being Known 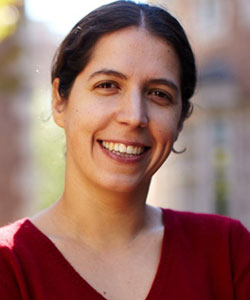 My mom thinks she can read me like a book. And, as moms are apt to be, she’s right. When we’re on the phone, she knows what mood I’m in before I finish my first sentence. She knows if I like someone (or don’t) before I know it myself. It’s great to grow up with parents who understand your quirks, who can anticipate your moods, and who know what really matters to your happiness. The danger is that you’ll grow up to spend your life studying how people can know you better than you know yourself.

Maybe my childhood is to blame, but I am fascinated by these kinds of questions. If Laura says she’s shy, but her friends and family say she’s not, who should we believe? When I entered graduate school, the standard operating procedure in the field of personality psychology was to trust self-reports. If you wanted to know what people were like, you were supposed to just ask them. But early on in graduate school, I stumbled upon [Willem] Hofstee’s 1994 paper “Who Should Own the Definition of Personality?” More than any other, that paper changed my research career. In it, Hofstee challenged the common wisdom in personality psychology that self-reports are the best measure of traits and argued that there are many reasons to predict that reports by others — informants, as we like to call them — should be even better than self-reports. Hofstee’s paper threatened not only the preferred method for personality assessment, it also undermined the familiar conviction that individuals are the best experts on themselves.

I was inclined to agree with Hofstee and to think that I was not an expert on myself, but I was surprised at how little empirical research existed on the subject. I decided to try to tackle this thorny problem. Building on the pioneering work of other personality psychologists, such as Oliver John, David Funder, and Delroy Paulhus, I set out to compare the accuracy of people’s self-perceptions with the accuracy of their friends’ and family members’ perceptions of them. The trick was to also get a measure of what people are really like, independent of what they say they’re like and what their friends and family members say they’re like. Returning to Laura, to determine whether she really is shy (as she says she is) or not (as her friends say), we needed to measure what Laura is really like.

One way to test the accuracy of self-reports and informant reports of personality is to compare them to laboratory-based tests of personality. If Tim says he gets anxious easily, but his friends say he’s cool as a cucumber, we can see how Tim reacts when we put him in an anxiety-provoking situation (e.g., when we tell him to give a two-minute speech about what he likes and dislikes about his body). If Julie says she’s cooperative, and her friends say she’s dominant, we can see how much she interrupts other people in a heated group discussion. If Mike says he’s not especially smart, and his friends say he’s brilliant, we can give him an IQ test and see how he does.

In addition to these laboratory-based methods, another tool has appeared on the methodological scene that could help measure people’s behavior in their natural environments. My friend and collaborator Matthias Mehl developed the Electronically Activated Recorder (EAR), a small, digital audio recorder that people can wear as they go about their everyday lives. In our studies, participants wear the EAR for up to a week, and it turns on and off (without them knowing exactly when), recording occasional audio snippets of their daily lives.  From these snippets, we can extract measures of their personality. How funny are they? How shy? How argumentative? Of course, not all aspects of personality are audible, but even silence can be informative. In fact, when I listened to my own recordings years ago, what struck me most was how much time I didn’t spend with others, and how often I wasn’t talking. All these thoughts I remembered having, and thought I expressed, were nowhere to be heard. As it turns out, most personality types have some behavior manifestations that can be picked up by the EAR. Using the EAR, we can then see whether this objective, real-world measure of personality corresponds with how participants describe themselves and with how their friends and family members describe them.

We’ve done both kinds of studies in my laboratory, and in both cases the verdict was the same: People’s self-reports of their personality were no more accurate than the reports made by their friends and family. No one group was more accurate, overall, but there were interesting patterns. There were some traits for which self-reports were better than close others’ reports and some traits for which the opposite was true. These patterns depended on two well-known trait characteristics: how observable the trait is and how evaluative (desirable or undesirable) it is. Self-reports tended to be more accurate than reports by close others when the personality trait in question was not very observable (e.g., anxiety). For observable traits, such as talkativeness and dominance, the self- and close-other reports were equally accurate because these traits are easy for everyone to see, and, in fact, we know from research that even complete strangers can judge these traits pretty accurately. On the other hand, close others tended to be more accurate than the self for extremely desirable or undesirable traits, such as intelligence or attractiveness. This trend likely occurs because people have a hard time being objective about themselves for these kinds of traits. Interestingly, this result wasn’t due to people seeing themselves too positively (e.g., everybody thinking they’re brilliant and beautiful). In fact, close others’ ratings were often more positive than self-ratings. But the self-ratings were all over the place: Some people overestimated, some people underestimated, and in the end, their self-views had almost no relationship to reality. Close others, on the other hand, did tend to give very positive ratings, but their ratings were still realistic — the smartest and most beautiful people were rated more positively than the less smart and less beautiful.

These results, which I used to develop the Self-Other Knowledge Asymmetry model, get me a step closer to my goal of being able to know who to trust when a person’s self-view disagrees with how others see him or her. When it comes to a person’s mental and emotional life, trust them — they probably know best how pessimistic, happy, introspective, and regretful they tend to be. When it comes to their best and worst characteristics, trust their friends — they probably know if they’re selfish, charming, likeable, or callous better than they do.

So if Laura says she’s shy, and her friends say she’s not, why do they disagree? Maybe it is because shyness can be thought of as a state of mind or a behavioral trait. Most likely, Laura is someone with good social skills who likes being around others and talks a fair amount, but who feels some anxiety while doing so and worries about what other people think of her. She thinks she’s shy because her thoughts and feelings are most salient to her, and her friends think she’s outgoing because her behavior is most salient to them. In the language of the Big Five personality traits, Laura is probably high in neuroticism but also high in extraversion (shy people tend to be high in neuroticism and low in extraversion).

When it comes to personality traits, there are things we know about ourselves that others don’t know, but there are also things others know about us that we don’t know. We have bright spots and we have blind spots. This might not seem surprising, but it could have big implications for how researchers measure personality. It might also mean we should listen to our mothers, spouses, colleagues, and friends more when it comes to who we are and how we should live our lives.

Observer > 2012 > September > Knowing Others and Being Known

These findings are very important in delineating when self-perception may be more accurate than the perception of friends or family. I wonder if these same distinctions would hold when we compare the feedback offered in office environments through 360o feedback, or performance feedback sessions. It would be very helpful to those of us consulting to, or working in, companies.

Simine Vazire is an associate professor of psychology at Washington University in St. Louis. In her lab, she investigates how accurately people can perceive their own, and others’, personalities. She can be reached at simine@gmail.com