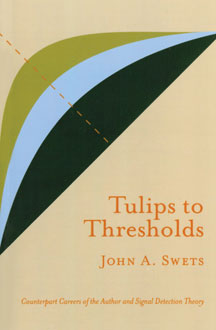 Our lives are full of yes-or-no questions: Will it storm today? Will the stock market rebound? Is this plane safe to fly? Is the witness lying? Do I have cancer?
We are all diagnosticians in our own worlds, but such questions often lack tidy answers. The evidence is ambiguous and incomplete. So we pick the most reliable indicators, and set thresholds for yes and no, certainty and uncertainty. How many false alarms are acceptable, if we want to spot every lethal brain tumor? How many unsafe planes are acceptable, if we want them mostly flying on time?

Our ability to make such judgments of life’s risks has been vastly improved over the last half century, not in small part because of the work of psychological scientist John A. Swets. Swets is the intellectual father of signal detection theory (SDT) — an idea he borrowed from World War II radar experts and adapted for human decision making. The problem for both radar and for the human mind is detecting the few meaningful signals in a lot of random noise, and the tool that Swets and his colleagues came up with —the so-called receiver operating characteristic (ROC) curve — points the way to the best decision threshold for each unique problem.

Swets traces the co-evolution of SDT and ROC and his own personal and professional development in a new memoir, Tulips to Thresholds (Peninsula Publishing). He narrates his own journey, from his Dutch origins and devout religious upbringing in Holland, Michigan, and his marriage to his lifelong partner “Mickey,” to his discovery of mathematical and experimental psychology at the University of Michigan, and his intellectual fulfillment at MIT; Bolt, Beranek and Newman; and Harvard Medical School, where his applied his theoretical breakthroughs to the emerging science of medical diagnosis. It is the autobiography of a signal idea entwined in a singular life.