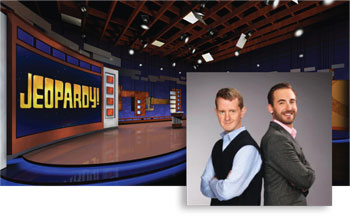 The show's two most successful and celebrated contestant Left: Ken Jennings won a record 74 Jeopardy! games in a 2004 and 2005. Right: Brad Rutter had $3.25 million in Jeopardy! winnings.

IBM and the game show “Jeopardy!” announced recently that “Watson” — a computerized contestant long in the works — is ready to show its cognitive savvy on the air. For three consecutive nights starting February 14, Watson will match wits with Ken Jennings —who won 74 games in a row, the longest streak ever — and Brad Rutter, who holds the record for “Jeopardy!” winnings, more than $3.2 million.

As many as 20 IBM scientists have been working on Watson — named after the company’s founder, Thomas J. Watson — for more than three years. Why would a company commit so much time and money to such a, well, trivial pursuit? Well, think about just what it is that “Jeopardy!” really tests in people. It’s nothing less than the natural human ability to negotiate a vast amount of general knowledge — making connections and assessing relationships between bits of information, discarding useless facts, and focusing on what’s most relevant — almost instantaneously. In short, it tests people’s intellectual suppleness to make educated guesses.

We all do this every day, of course, mostly outside our conscious awareness, but that doesn’t make it any less remarkable. Indeed, playing “Jeopardy!” successfully requires much more cognitive flexibility than the ultimate egghead’s game: chess. IBM scientists have already devised a computer program, named “Deep Blue,” that defeated world champion Gary Kasparov. That’s because chess is a rule-based game with finite possibilities. Human knowledge may be trivial, but it’s infinite.

If the IBM scientists are successful, they will have figured out one of the most robust heuristics at play in the human mind, which psychologists call “anchoring and adjusting.” The anchor heuristic is one of the most useful and tricky of the mind’s cognitive tools. To get a sense of its workings, think of a sailboat’s anchor. You decide to take a break from sailing and anchor your craft in a small lagoon. When you drop the anchor, it secures the boat to a specific spot in the sandy bottom below. The anchor holds, but the boat itself doesn’t stay in one spot. You give it a fair amount of anchor line, so it can drift a bit, depending on the wind and tide and current. It might drift 10 or 20 yards toward the shoreline or out toward the open sea. It has a range of motion.

The mind has a similar tendency to drift around a firm anchor, depending on the cognitive tides and currents. The anchor can be a fact about the world, a perception, or a point of view about issues or problems — even your attitude toward a friend or partner. The point is that our thoughts are dynamic, in motion, but our mental anchors limit our choices.

So imagine that you are actually a contestant on the show. It’s “Final Jeopardy” and you’re in a dead heat with the two other contestants. The category is Founding Fathers, which is good because you know a bit about Revolutionary War history. Alex reveals the answer: George Washington was elected president of the United States in this year. Uh-oh. You don’t know for sure. There is a lot of money at stake, and you have two kids you’d like to put through college. You’re going to have to make an educated guess. That familiar “Jeopardy!” tune starts to play.

So how do you come up with your best guess? Other than 18th century historians, very few of us actually know precisely when the father of our country was elected. It’s not the kind of information you need to keep accessible in your memory every day. When we don’t have the precise answer we need stored in our memory, we use the next best thing: a factual anchor. That is, we probably have some other related historical facts stored in our heads. We probably know, for example, that the Declaration of Independence was signed in 1776.

Okay, 1776, so that’s at least a starting point. But you know it’s not a game winner, and the clock is ticking. So beginning with that mental anchor, you start adjusting – drifting if you will. You know for sure it wasn’t before 1776. Was it the next year, 1777? Five years later? Could it have been as much as 20 years later? What was going on in those years anyway? When was the Constitution written? Was that the 1780s? In your mind you come up with a range of plausible answers, moving away from the anchor in increments, and as time runs out you jot down the best of the possibilities.

This basic process of anchoring and adjusting has been studied and reworked for some years, and is holy writ for most cognitive psychologists. But it still leaves a lot of questions begging for answers, most notably: Why are our educated guesses wrong a lot of the time? “Jeopardy!” contestants — all taken together — get about eight of 10 questions correct; that’s impressive, but it also means they get almost 20 percent wrong. The fact is, if anchoring and adjusting were a perfect cognitive strategy, not only would “Jeopardy!” be a predictable and uninteresting game show, life would be a lot easier. But it’s instead an imperfect process that leads to all sorts of misjudgments and problems.

That is, unless we are aware of its power. We can monitor and fine-tune our use of this anchoring heuristic in daily life, and psychologists have been running a variety of lab experiments to refine the theory and explore how we can best channel our hard-wired tendencies. In an experiment from a few years ago, for example, Nicholas Epley of the University of Chicago and Thomas Gilovich of Cornell had volunteers answer general knowledge questions similar to those on “Jeopardy!” For instance, from the category of Animal Mothers: The number of months a pregnant elephant carries her baby before birth. In the Potent Potables category: The freezing point of vodka. (The George Washington example comes from that experiment as well.) They discovered, first, that people generate anchors in different ways. Usually, as with the 1776 example, they have a fact stored in their brain that they sense is vaguely connected to the question at hand. If they have nothing in their memory to anchor on, they simply guess blindly.

What’s interesting is that even if the anchor is an arbitrary guess, people still adjust around it. A person’s original anchor exerts a kind of cognitive drag on the mind as it tries to adjust, so that the farther one gets from the anchor, the less plausible it feels to keep adjusting outward. Think of that sailboat in the lagoon; it has a range to drift about, but the range is limited by the weight of the anchor in the sand. As a result, what the students in the experiment did was adjust as far as they could, until they reached a date that seemed plausible enough to settle for.

Scientists label this “satisficing” — as in, the answer is satisfying enough to suffice. Much of life is “satisficing” because we often don’t have the exact answer we need — not just in factual knowledge but in all sorts of problem solving. And we often need to make choices under less-than-optimal conditions: under time pressure, emotional stress, or while coping with all sorts of distractions. Epley and Gilovich did some experiments to see if they could illuminate a satisficing version of anchoring. They wanted to see why some people might be better at this than others.

For instance, in one study they used a standard personality test to sort out the most reflective students from the least, figuring that the ones who tended to mull things over would do better at making educated guesses than those who answered more impulsively. That’s exactly what they found. It appears that simply slowing down and pondering makes the anchoring process more accurate. Then, in a second experiment, they asked the same “Jeopardy!” questions of students who had spent the day boozing, and then compared them to sober students. You can probably guess who did better. Finally, they did the laboratory version of “Jeopardy!” with some students who were distracted and others who were not. They found, not surprisingly, that the sober students and the less distracted students did better at adjusting their guesses and approximating the correct factual answers. Basically, what they demonstrated with this series of studies is that making educated guesses takes a lot of mental effort, and many things can sabotage that effort.

So back to “Final Jeopardy!” — just to see how you’re doing. You’re a reflective type, or you wouldn’t even be up there. You sure didn’t need a psychologist to tell you not to have a martini before testing your wits on national television, and the only thing competing for your attention this moment is George Washington’s election. You anchor, you adjust, and you take your best shot: What is 1788?

And we’ve got a new “Jeopardy!” champion!

This article is adapted from the book On Second Thought: Outsmarting Your Mind’s Hard-Wired Habits, published recently by Crown.