Observer > 2012 > February > How I Spent My Summer Vacation: Testifying Before the US Congress 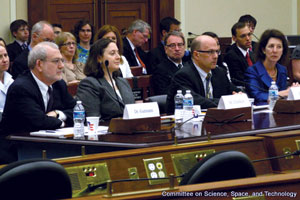 Hillary Elfenbein (second from the left) testifying on a panel for the Congressional Committee on Science, Space, and Technology

This adventure began with an email I nearly deleted as spam.

In 2007, Heather Kelly from APA asked to help gather evidence to fight an amendment to the National Science Foundation (NSF) authorization act that called for de-funding my NSF grant along with six others — on the grounds that Representative John Campbell (R-CA), a first-term member of Congress, thought the titles sounded “silly.”

Rep. Brian Baird (D-WA) used my grant as an example to defeat this amendment and to question the wisdom of politicians second guessing peer-reviewed science. After all, the same research they called silly was being incorporated by the US Army Research Institute into training programs for soldiers.

My quiet life as a scientist continued until early 2011. With the debt ceiling looming overhead and a series of first-term members of Congress elected with promises to shrink the size of government, the Republican staff members of the Science, Space, and Technology committee called for a hearing purportedly to educate their members about the value of NSF-funded social science. Then Senator Tom Coburn (R-OK) published a report calling for the demolition of the NSF’s entire social, behavioral, and economic sciences (SBE) division, and all heck broke loose. The minority (a.k.a., the Democrats) could invite only one witness to make their case.

The honor of serving was not entirely appealing. These are difficult times in the funding environment, and many politicians openly describe social science as a waste of government money. I chose a career in academia so that I could stay inside the Ivory Tower, and coming out just to be a subject of ridicule for politicians didn’t seem like a great idea. As the only research faculty member on the panel, I also needed to represent the interests of scientists across a spectrum of disciplines ranging from psychology to sociology, anthropology, and even economics. Usually we researchers focus deeply on relatively narrow topics — it was nerve-wracking to do just the opposite.

My sense of dread increased when I was sent essay questions. You see, when you testify in Congressional hearings, they ask you to write a set of long essays beforehand and another set of long essays afterwards. The first question was straightforward enough. I had to list my academic qualifications and describe my work that has been funded by the NSF, how that work is being used, and by whom.

The questions got more challenging from there: “Why are social, behavioral, and economic sciences important to the physical and life science communities, to the Federal government, and to the American taxpayer?” I decided to focus on the broadest level: “The social and behavioral sciences in general are important because technology, health, industry, and politics are ultimately in the hands of people — who behave rationally and irrationally. The learning and implementation of all other sciences depends on the human factor.” A third question covered similar territory, and I argued that we receive an unusually high return from investments in the basic sciences, including our world-class university system and the reinvestment of federal grants into the economy via salaries and durable goods.

The last question was truly painful: “Why is it in the American taxpayer interest for the Federal government to fund all disciplines within the social, behavioral and economic sciences?” My only choice was to turn this question back on itself by questioning how well any of us can judge scientific fields outside of their own expertise. Relaying my 2007 experience, I pointed out the risk of judging books by their covers, and discussed the process and value of peer review:

A scientific problem can look unimportant from the outside, which is why it is valuable to have sufficient background and context to judge the work’s potential merit. The peer review of science is certainly not perfect, and […]one is reminded of Winston Churchill’s famous quote, “Democracy is the worst form of government, except all the others that have been tried.”

As challenging as it was to write these essays, it was also a refreshing change from the usual protracted journal-review process to have a paper go straight to press.

The hearing itself was somber and scary. The opening speech emphasized that SBE are “soft sciences,” and the pursuits of scientists in these fields must be weighed against national priorities. Each witness made an opening statement. The head of the NSF’s SBE directorate Myron Gutmann discussed the division’s budget and how it was used. Peter Wood, the President of the National Association of Scholars, an organization that fights political correctness in universities, focused on the politicization of social sciences, and how there is an oversupply of PhDs. Finally, Diana Furchtgott-Roth — a political administrator and self-proclaimed economist — proceeded to argue that funding social sciences does not constitute a public good. She also pointed out that early social scientists such as Adam Smith worked without government funding, while failing to mention these scientists were typically supported by monasteries or family wealth — not exactly a feasible model for today’s researchers.

In the question and answer period, my proudest moments involved coming up with lines that I would normally imagine only later. Rep. Dan Benishek (R-MI) talked about not being able to justify increases in funding for social sciences at a time of fiscal crisis. My hand lifted itself, and I said to justify the increase, “You have to believe that this is an investment, not an expense.” He snapped back that everyone says that about their own department. Later, Rep. John Sarbanes (D-MD) later told me never to apologize for the value of psychological research, because we are contributing to the American Dream. Toward the very end of the session, one member asked about the lessons that Rep. Campbell and I learned in 2007 when my NSF grant was almost de-funded because of its title. I responded that “for me the lesson learned was to pay a lot more attention to the titles of grants, and for the Representative, the lesson was maybe to read the abstracts as well.”

Lessons From the Hearing Room

Sitting in that hearing room, I was reminded that politicians focus on the broadest range of national priorities. Their lack of knowledge about exactly what psychological scientists do is not their fault. We need to embrace our role as educators outside of our classrooms and laboratories. For example, some members of Congress at the session were confused about the distinction between “basic science” (i.e., without foreseeable commercial applications) and “soft science” (i.e., a pejorative term for non-life sciences). Attempting to clarify this misunderstanding allows us to explain why agencies like the NSF are absolutely vital to psychological scientists.

Politicians are also less willing to fund projects they cannot explain to their constituents. During my 2007 visit, Rep. Baird asked me how he should describe my research to a taxpayer who is struggling to pay their bills. All of us who seek government funding should have answers to this question. How does our work make people safer, happier, or better able to meet their basic family needs?

Although we should make a better effort to educate politicians, we also need to fight for peer review so that we retain the final judgment on research quality. Some politicians compare peer review to letting pork barrel perpetuate itself. However, peer review is democratic because it involves thousands of scholars. It is efficient, as scientists volunteer countless hours of their time (saving the government millions) in exchange for a voice. Allowing political review to overturn peer-reviewed research would be the worst kind of “big government” intervention.

Politicians simply cannot dictate from the top what constitutes good science. The history of science suggests that politicians cannot predict what agenda scientists should follow. Instead, curious minds make connections that can seem ridiculous to everyone else, including politicians, until these ideas are proven brilliant — and stimulate the economy. Perhaps there are some politicians who could have predicted that NSF grants for teaching machines how to recognize the thickness of lines would lead to the invention of barcodes, or others who would have known that NSF grants for digital libraries would have led to the founding of Google. But, more often, science leaps forward through basic research.

By putting ourselves in the shoes of politicians, and thinking in terms of their priorities, we can help them to see that our interests are aligned.

Observer > 2012 > February > How I Spent My Summer Vacation: Testifying Before the US Congress

Hillary Anger Elfenbein is a professor of organizational behavior at Washington University in St. Louis. Her research focuses on emotion and interpersonal behavior. You can find more information about her congressional testimony at http://apps.olin.wustl.edu/faculty/elfenbeinh/other.shtml. She can be contacted at helfenbein@wustl.edu.

On the Effects of COVID-19 Safer-At-Home Policies on Social Distancing, Car Crashes and Pollution
IZA Institute of Labor Economics