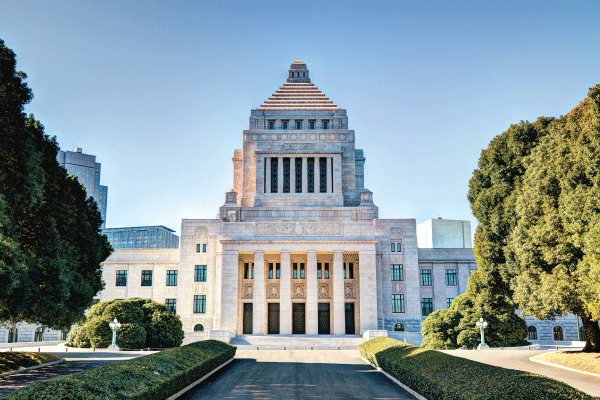 Japan has been at the forefront of scientific and technological advancements for decades, producing countless influential scientists and important research discoveries. Thanks to a robust system of government funding for science, Japanese psychological scientists can help to drive these discoveries and produce curiosity-driven research. If there’s one government funding program in particular that APS members should know about, it’s KAKENHI: Grants-in-Aid for Scientific Research.

Is there something APS can do to help you better understand and track funding opportunities in your country? Let us know by emailing aps@psychologicalscience.org.

Japan is a research and development powerhouse. As of 2017, the country was third globally in gross domestic expenditure on research and development (GERD), trailing only the United States and China. Of Japan’s $171 billion (translated to U.S. dollars) in GERD, $21 billion (13%) went toward basic research, according to the U.S. National Center on Science and Engineering Statistics (National Science Board, 2020). By percentage of GERD spending for basic research, Japan is fifth in the world, behind France, the United Kingdom, the United States, and South Korea.

The KAKENHI program is managed by JSPS, the Japan Society for the Promotion of Science (日本学術振興会). Established by an imperial endowment in 1932, JSPS is one of the country’s premier funding agencies for research. KAKENHI offers single and multiyear research grants for all fields, from the humanities to the social and natural sciences, and it funds research in both basic and applied sciences. According to JSPS (2019), KAKENHI’s 2019 program budget is around 237 billion yen (roughly $2.2 billion USD) and accounts for 50% of all competitive government funding for scientific research. Grants are distributed through competitions supporting curiosity-driven research based on creative ideas.

Pre- and postdoctoral fellowships in Japan

Additional research funding in Japan comes from universities and the country’s Ministry of Education, Culture, Sports, Science and Technology (MEXT), among other sources. MEXT also has some KAKENHI offerings.

On the international stage, KAKENHI both differs from and is similar to other countries’ funding programs in terms of the competitiveness of grant funding, the intensity of applications, and the actual monetary values of funding awards.

KAKENHI accepts and funds approximately 25% to 28% of research applications. This “success rate” was consistently around 20% until 2011, when it spiked to 29% because of programmatic changes and the adoption of multiyear research grants aimed at allowing researchers greater flexibility and reducing administrative burden. (The program’s relative budget peaked that year as well, to 263 billion yen; JSPS, 2019.) In comparison, the average success rate of research project grants is around 20% at the U.S. National Institutes of Health (NIH; see Lauer, 2020) and roughly 12% at the European Research Council (ERC).

KAKENHI has a “bottom-up” structure—that is, the program generally does not set overarching research priorities but rather chooses what to fund depending on the requests of the scientific community. This is similar to the approach that agencies such as the ERC use. In contrast, many funding agencies in the United States are more “priority driven,” meaning the agencies decide research needs.

In recent news, issues have arisen between new Japanese Prime Minister Yoshihide Suga and the Science Council of Japan (SCJ) over Suga’s veto of six academics who were recommended by SCJ for positions in the General Assembly, the council’s governing body. According to Science, “all six of the scholars had criticized legislation adopted by the previous administration, during which Suga was chief cabinet secretary” (Normile, 2020). Critics see this as a threat to academic freedom in the country, and SCJ wants Suga to explain his decision for the veto. SCJ represents over 800,000 scholars in all disciplines and gives policy recommendations, promotes scientific literacy, and promotes international cooperation.

APS spoke with several members about the psychological science research enterprise in their country.

“Compared to funding agencies in the U.S., like NIH and [the National Science Foundation], KAKENHI and grants from MEXT are less competitive,” said Keiko Ishii, a social psychologist at Nagoya University who studies cognition and individual differences in trust and reciprocity. “Fortunately, I have gotten grant funding through KAKENHI or/and grants from MEXT since I got my first job. Thanks to the funding support, I have published more than 60 articles.”

APS President Shinobu Kitayama (University of Michigan) studied at Kyoto University before receiving his PhD in the United States. He found it easier to get small amounts of money for research grants in Japan than in the United States, where the number of applications and larger grant sizes make for a very competitive funding environment. Some researchers believe grant money is spread more widely in the Japanese system, allowing for more researchers to receive smaller grants.

Kou Murayama (University of Tübingen), who studied at the University of Tokyo, draws a similar comparison between funding systems in the United Kingdom, where he used to work, and in Japan. “The money is distributed well to wide range of researchers in psychology” in Japan, he said.

KAKENHI accepts and funds 25% to 28% of research applications. The average success rate of research project grants is around 20% at the U.S. National Institutes of Health and roughly 12% at the European Research Council.

There are two types of grants under the Transformative Research category. Grants for Scientific Research on Innovative Areas seek to significantly advance existing areas of research and form new ones. Challenging Research (Pioneering/Exploratory) grants support researchers who are radically transforming research directions and existing research frameworks.

The Transformative Research and Scientific Research categories also fund what is called “Specially Promoted Research,” or outstanding projects that develop new scientific research fields, as well as a Fund for the Promotion of Joint International Research, to encourage international collaboration in research. A full list of grants and a brief explanation of them is available on the JSPS-KAKENHI website.

In addition to these research opportunities, JSPS organizes four programs designed to encourage pre- and postdoctoral researchers to conduct joint research projects in Japan. The program also offers the JSPS Prize, which recognizes and supports researchers conducting high-quality research early in their career.

See all government funding opportunities at the Federal Research, Funding, and Policy page on the APS website.

Along with its KAKENHI style funding, “MEXT offers support for the research infrastructure at private universities in Japan,” said Jun’ichi Katayama, a cognitive psychophysiologist at Kwansei Gakuin University (KGU). “Thanks to support programs like the Project of Academic Frontiers’ Advancement or the Supported Program for the Strategic Research Foundation, the Center for Applied Psychological Science at KGU has been a center for academic-industrial cooperation, sharing the outcome of joint studies with society since 2002.”

With so many opportunities for funding in Japan, keeping scientists informed on open calls for research proposals is important. Many universities have systems in place that inform faculty of relevant funding opportunities, proving helpful to researchers like Ishii.

“The administrative research support section at Nagoya University sends posted information regarding funding to all the researchers every day,” said Ishii. “At Kobe University, where I worked before coming to Nagoya, the system was similar.”

For psychological scientists who are interested in international collaborations with Japanese colleagues, JSPS offers opportunities for short- and long-term visiting researchers in Japan. As with many collaborative mechanisms of this type, international collaborators typically need their own funding sources, as grants in Japan often support only Japanese researchers. Researchers generally believe an increase in collaboration and exchange of ideas would improve the quality of psychological science work domestically in Japan as well as increase the quality of international work.

Speaking broadly about psychological science in Japan and in the United States, where he now works, Kitayama described differences in how Japanese and U.S. scientists “package” research ideas and explain the conceptual picture their data show, sometimes resulting in difficult translations between countries. Research training in the United States encourages a “show-and-tell” of the latest findings and frees scientists to say what comes to mind to generate ideas, he said. Training in Japan differs from that, meaning that crossing over from one country to the other can be difficult for scientists.

Kitayama believes it is very useful for researchers to understand both countries’ systems and to be able to move back and forth between systems and benefit psychological science through collaboration. He noted, however, that cultural differences can create roadblocks to collaboration and the exchange of ideas. Allowing open spaces for Japanese researchers to share their research ideas and projects could help bridge some of the cultural barriers to collaboration, he believes.

Early career scientists affiliated with an EU institute who are looking to work independently and lead a new research effort should consider applying for the European Research Council (ERC) Starting Grant program.