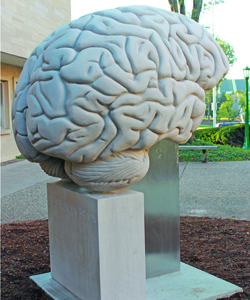 Indiana University stands by the claim that it houses the world’s largest anatomically accurate sculpture of a human brain.

As previously reported in the APS Observer, Indiana University Bloomington (IUB) unveiled what was said to be the world’s largest anatomically correct sculpture of a human brain at the Department of Psychological and Brain Science’s recent 125th anniversary celebration.

But following a refutation from APS Fellow F. Robert Treichler at Kent State University (KSU) in Ohio, IUB’s primacy in the “large-brain-sculpture” arena is under threat.

According to the concerned KSU professor, the Kent State Golden Flashes have hosted a much larger brain since 1999 when Cleveland Arts Prize recipient Brinsley Tyrrell and several students carved the 12-foot sculpture from 30 tons of sandstone. According to an estimate provided to Treichler by the Cleveland-based engineering firm Barber & Hoffman, the result was a brain with a volume of approximately 140 cubic feet and a weight of approximately 10.29 tons. 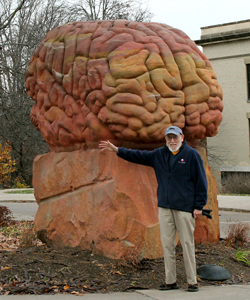 Standing in at only seven feet and weighing a mere six tons, IUB’s brain seems tiny by comparison. Professor Treichler, who describes himself as a “longtime instructor in physiological psychology and behavioral neuroscience courses,” vouches for the anatomical correctness of the KSU sculpture, affirming that it “includes all the major exterior cortical landmarks of the human brain” as well as “a portion of the brain stem and cord.”

In response to Treichler’s claim, the Hoosiers at IUB’s Department of Psychological and Brain Sciences say they admire the colorful, impressionistic form of the massive Kent State sandstone brain. But the university stands by its claim to the world’s largest anatomically accurate stone brain sculpture. The university says its brain was carved from a cast of a preserved, mature human brain — all the way down to details of several of the larger cranial nerves along the brain stem.

Compare the stone sculptures in the accompanying photos to a human brain, and you be the judge.