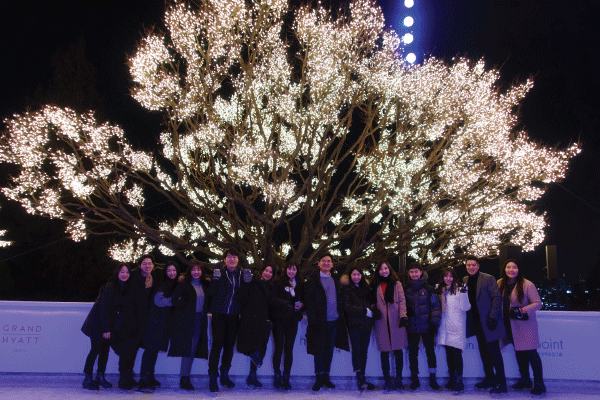 Image: Ahn (second from right) and his lab members at an end-of-year party in Itaewon.

Woo-Young Ahn is an associate professor of psychology at Seoul National University in South Korea. He uses computational modeling and mathematical psychology to identify behavioral markers of addiction and related disorders that can be integrated into clinical testing and treatment.

See all Careers Up Close Interviews

I’m a clinical psychologist but have a unique background in that I studied engineering and applied physics before I changed my major to clinical psychology. I have been interested in using mathematical and computational approaches to better understand psychiatric conditions, and I wanted to learn more about those approaches during my postdoc. During my PhD training at Indiana University, I received intensive training in these areas in addition to clinical psychology (a.k.a., clinical science). For my postdoc, I worked at the Virginia Tech (VT) Carilion Research Institute with Read Montague and Peter Dayan, who founded the field called “computational psychiatry.”

After spending 2 years at VT, I worked for about a year as a postdoc at the Virginia Commonwealth University Institute for Drug and Alcohol Studies, where I received excellent training in addiction neuroscience. I then got a tenure-track faculty position in the psychology department at The Ohio State University (OSU) in 2015. My clinical research has focused on addiction and related disorders.

There and back again

I’m currently an associate professor in the department of psychology at Seoul National University (SNU), my alma mater. OSU’s psychology department was a fantastic place for me. I think it is one of a few departments in the United States where clinical psychologists can work on several frontiers in computational modeling and mathematical psychology. But after 2 years at OSU, I decided to move to SNU, which is the most prestigious school in South Korea and has lots of talented students and research opportunities. I saw a lot of potential in my career at SNU and made the hard decision. Thankfully, I’m happy overall with my life at SNU.

I seek to elucidate the neurocognitive mechanisms of decision-making using computational approaches and would like to develop cost-effective markers of psychiatric disorders, especially addictive disorders. To develop such markers, I think computational approaches can be very useful; they can reveal hidden cognitive processes and increase the markers’ precision and reliability. There are many ongoing projects on that topic, including one using adaptive design optimization (ADO) in collaboration with Jay Myung and Mark Pitt, my former colleagues at OSU.

ADO is a machine-learning method that uses Bayesian learning algorithms to optimize experimental design on the fly. It sounds complicated, but the idea is simple—instead of designing an experiment based on heuristics and prior knowledge, we use a computational algorithm to conduct adaptive experiments on a trial-by-trial basis. In a recent study with my OSU colleagues in Scientific Reports, we found that ADO was 3 to 5 times more precise and 3 to 8 times more efficient than conventional experimental design at achieving test-retest reliability in a study of delay discounting among patients with substance use disorders. With ADO, we could achieve over 0.95 test-retest reliability of the discounting rate within 10-20 trials.

The impact of COVID-19 is substantial, presumably just like everywhere in the world. South Korea has been relatively successful against COVID-19, but still, it is hard to recruit research participants. We are thinking about several ways (e.g., studies using mobile devices) to deal with it.

I teach undergrad and graduate-level courses and mentor students in my lab. I seek to build a “happy” laboratory (happylaboratory.org) where members respect each other, feel they are growing intellectually, enjoy excellent support for research, and generate research outputs that will make them competitive for their next career steps. I try to foster communication within the lab, recruit “nice” people who are effective team players and share similar visions with each other, and individually tailor training based on each member’s strengths and interests.

I enjoy publishing new findings in journals, learning new knowledge and skills every year, and mentoring the next generation of scientists and guiding them to eventually become independent researchers!

The most challenging step in my career was to get into a PhD program in clinical psychology in the United States. At that time, I didn’t have a lot of background in psychology, and English is not my native language. In my essay (back in 2006), I wrote that mathematics might help explain some psychiatric disorders. I think many clinical professors would have considered the idea bizarre back then, but the approach is very trendy in the field now! Luckily, the clinical psychology program at Indiana University was very open to the idea and offered me admission.

With my lab members, I will continue to investigate the neurocognitive mechanisms underlying decision-making and why we often make irrational choices. I hope to identify cost-effective and precise markers of individual differences, which may lead to successful translation of research into clinical practice, perhaps in individualized treatments or interventions. Personally, I would like to have a good balance between work and personal life and stay physically healthy.

I think it’s a good idea to learn programming languages (e.g., Python, R) while in grad school or even before then. And learn to handle lots of uncertainty in graduate school by finding ways that work for you to boost your confidence and persistence. Relatedly, try to be persistent despite failures (e.g., paper/grant rejections, slow research progress, etc.), as rewards often come late in academia.

Do you know an early-career researcher doing innovative work in industry or academia who might be a good fit for Careers Up Close? Contact the Observer at apsobserver@psychologicalscience.org.