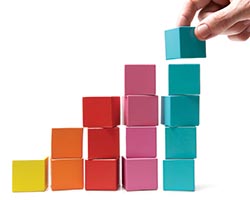 Children who play frequently with puzzles, blocks, and board games tend to have better spatial reasoning abilities than those who don’t, according to data from a nationally representative study published in Psychological Science. “Our findings show that spatial play specifically is related to children’s spatial reasoning skills,” says psychological scientist and lead researcher Jamie Jirout of Rhodes College.

Although previous research indicated that spatial play activities might foster children’s spatial reasoning, relevant data from a large and diverse sample were lacking, says Jirout. When the Wechsler Preschool and Primary Scale of Intelligence (WPPSI), a commonly used test of cognitive ability, was revised and standardized, it provided Jirout and her coauthor Nora Newcombe, an APS William James Fellow at Temple University, with an opportunity to study children’s spatial play and spatial thinking.

Jirout and Newcombe analyzed data from 847 children, ages 4 to 7, who had taken the revised WPPSI, which included measures of cognitive skills that contribute to general intelligence. The children’s spatial ability was specifically measured via the commonly used Block Design subtest of the WPPSI, in which children are asked to reproduce specific 2-D designs using cubes that have red, white, and half-red/half-white faces. The researchers also examined survey data from parents about the children’s play behavior and joint parent–child activities.

The researchers argue that targeting children’s spatial play may be one possible intervention tool for improving their spatial ability.