APS Fellow and Charter Member Bartley Hoebel passed away due to cancer on June 11, 2011. Hoebel was best known for his research on food addiction, especially for his work showing that sugar can be an addictive substance.

Bartley (Bart) Gore Hoebel was born on May 29, 1935 and spent much of his childhood in Pleasantville, N.Y. and Salt Lake City, Utah. His father was an academic anthropologist who studied legal customs among various Native American Tribes, and thus Bart spent several summers on reservations. Bart was an avid Cub and Boy Scout and earned the top rank of Eagle Scout. He loved tinkering and building, which proved invaluable for his career as an experimental scientist.

Bart received his BA in psychology at Harvard where he worked under the direction of Philip Teitelbaum on the role of brain mechanisms in the control of eating and satiety. This subject became his major research interest for the rest of his life. After a few years as a graduate student at the Rockefeller Institute (now University), he moved to the University of Pennsylvania where he completed his Doctorate in 1962 again under the guidance of Philip Teitelbaum. He became an assistant professor in Princeton’s Psychology Department in 1963, an associate professor in 1967 and a professor in 1970.  He had no intention of retiring and was looking forward to moving into the new Princeton Neuroscience Institute/Psychology building when he developed an ultimately fatal cancer. Bart’s wife Cindy, a musician active in the Unitarian Universalist Congregation of Princeton, predeceased him.  They have two daughters (Valerie and Cary), a son (Brett), and two grandchildren. 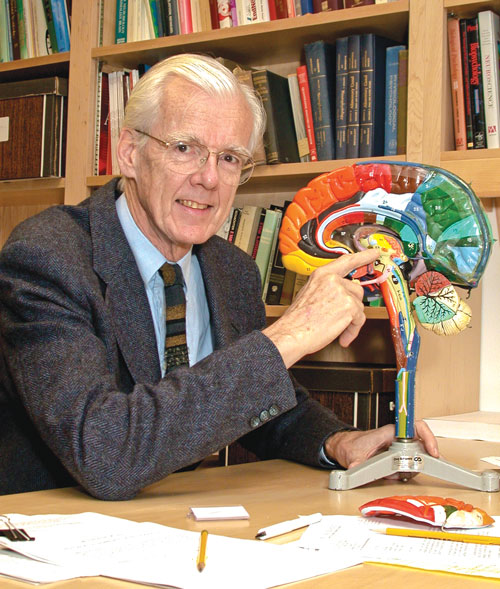 Bart’s early research was on an area of the brain called the hypothalamus and its control of eating and satiety. Later, he expanded this research to consider the physiology of other types of motivated behavior including addiction and the roles of the neurotransmitter dopamine in motivated behavior. He pioneered the development of techniques for introducing minute amounts of neuroactive chemicals into specific areas of the brain. In the last decade, Bart’s research became relevant to the problem of human obesity. He showed that rats allowed to binge on sugar showed characteristics suggesting that they had become addicted to sugar.

Bart was a superb and successful teacher of undergraduates and graduate students. In the laboratory, he gave his students wide freedom to explore on their own but was always available to help them. In large lecture classes he was a bit of a showman.  Once he came in with a human brain in his gloved hands. To the horror of the class, he took a big bite out of the brain, which turned out to be made of grey jello.

An old friend described Bart as “a man without guile.” He was never known to utter an unkind or demeaning word about another person. He was committed to his family, his students, and his community, which stretched from Princeton right around the world. He founded the Princeton Peace Center and ran it for its life from 1969 to 1973 and devoted one of his sabbatical leaves to it. The center was an important focus of anti-Vietnam war activity and information. He was active in social issues in the Unitarian Universalist Congregation of Princeton. His concern for environmental issues was reflected in his turning over his Christmas tree farm to the New Jersey Greenways program.

Bart had some extraordinary hobbies. He was a commercial-licensed hot air balloonist. He built a fire-truck-mounted steam calliope, and his wife played it on various occasions such as Alumni reunions. His last major extracurricular project was to restore a stern-wheel steamboat, Splash, that traveled between New Hope and Lambertville and was used to teach “clean-water ecology, physics and U.S. history” to students and adults.

Because of his rapid decline and impending demise, his Festschrift was moved up so he could enjoy the fellowship and appreciation of his colleagues and former students. Throughout this celebration of his life and work, he remained cheerful. When the people around him began to tear up, Bart smiled a big grin and said “Hey, cut it out. I’m not dead yet.”

This text was part of a resolution submitted by Hoebel’s colleagues to the Princeton Faculty on September 19, 2011. The vote to adopt the resolution was unanimous.

Mr. Gunn…thanks for your comment. I don’t rlaley think HFCS is a chemical made by the “evil” food manufacturers. I don’t think food manufacturers are evil. But I do think the biochemistry here makes solid sense. Unfortunately, as far as HFCS goes, it is more a quantity issue than anything else. Most Americans consume massive amounts of HFCS…and only few people watch what they eat carefully. As far as your comment on fruit goes….you actually won’t have the same negative effects with fruit because it is again a matter of quantity, and how much fructose you can consume with fruit. Fruit like strawberries, oranges and grapefruit are low on fructose. Some others (grapes, apples, bananas) have higher amounts, but even there, fructose is at best about 5-7% of the total weight of a fruit. So you’ll need to eat a pound of fruit to get 5 teaspoons of fructose. Compare that to the average cookie or ice cream, and you’ll see what I mean.