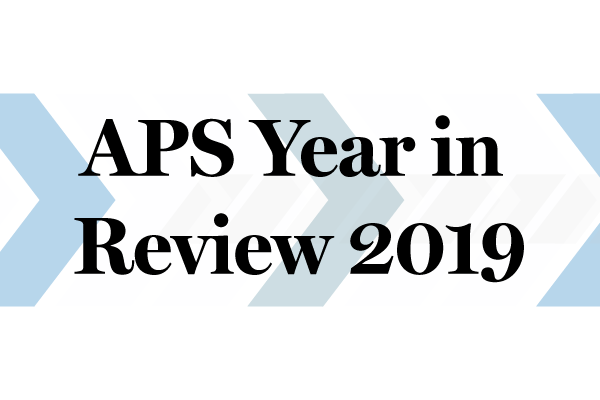 From hosting a panoply of integrative science in Paris to helping policymakers understand the role of psychological science in critical social issues, APS had a momentous year. Here are some highlights.

Traffic to the APS website, psychologicalscience.org, reached an all-time high, with visitors seeking information about the latest research funding in our field, and members connecting with journals, employment and career resources, and more.

Coverage of APS research appeared in hundreds of major media outlets all over the world in 2019, including stories throughout the year in The New York Times, BBC News, Forbes, The Atlantic, and Scientific American. Keep up with APS news at psychologicalscience.org/news.

Paris was an ideal locale for the 3rd biennial International Convention of Psychological Science, where 2,701 scientists and students representing 70 countries gathered in March to network and hear presentations from the world’s leading integrative psychological scientists. Learn about the 2021 ICPS in Brussels at psychologicalscience.org/conventions/icps.

A … Z, Albania to Zimbabwe, that is: In 2019, APS members hailed from 96 countries spanning six continents. 2020 membership goal: Antarctica! APS is covering the Earth.

Descending on DC: The US Capitol set the backdrop for the 31st APS Annual Convention, which included presentations on applying behavioral science in government policymaking. APS Fellow Carsten de Dreu, Leiden University, served as the first non-US chair of the APS Convention Program Committee. Register for APS 2020 at psychologicalscience.org/conventions/annual.

APS presented its prestigious awards to 19 members whose groundbreaking work has shaped psychological science — and the careers of their students and colleagues — and to eight early-career researchers who are transforming the field. See the full list at psychologicalscience.org/observer/awards.

Keep up with APS throughout 2020! You’ll find the latest in research news, convention coverage, awards recipients, and much more at psychologicalscience.org.