Obesity is largely a failure of self-control. I know it’s possible to quibble about calories and carbs and dietary fat, but fundamentally, obesity comes down to valuing fattening foods today, in this moment, more than we value a healthy future. We know, rationally, that we should forego the French fries and brownies for some greater payoff down the line, but the moment’s temptations make it hard to keep our eyes on that future reward.

We do have the cognitive ability to project days or weeks or even years into the future, but we don’t do it when we’re making food choices in the here and now. What if we could trick ourselves into keeping our heads in the future? That’s the idea that a team of University of Buffalo psychological scientists has been exploring. Leonard Epstein and his colleagues wanted to see if overeaters might make less impulsive decisions if they were able to project themselves into the future at times of temptation.

The psychological jargon for this is “episodic future thinking”—or EFT for short. Think of it as remembering the future. This technique uses visual imagery and the power of personal memory to “experience” positive future events. For example, I might look into the future and see myself at my own wedding, a year from now, feeling joyous and optimistic and stylish. The more vivid the image, the better. This imagined experience becomes a memory, which I can then cue whenever I am tempted to do something that might sabotage that future.

At least that’s the theory, which Epstein tested in a couple simple experiments. He recruited a group of overweight or obese women, mid-20s, who wanted to have better control over their eating and weight. Half of these volunteers generated cues for positive future memories—some days, some weeks, some years into the future. The others, the controls, also imagined vivid events, but ones they had recently experienced. So in other words, only half the volunteers had the tools to project themselves into the future whenever they wanted to. 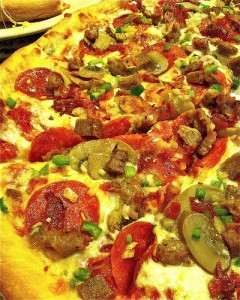 They used the cues to help them in real-time decision making. First, all the volunteers used their cues during a delayed gratification task. They were given the choice of $10 now, or $100 at various future times—tomorrow, in a week, a month, two years from now. Most of us would wait a day or even a week for that sweetened reward, but how about six months or a year? That’s the kind of self-control it takes to value long-term health over a pepperoni pizza, and that’s what Epstein measured for both future thinkers and controls. He expected that those who cued positive future experiences would be more disciplined about waiting for the hundred bucks.

And they were, clearly. Those who cued future memories were much more likely to take the long view when it came to rewards, valuing distant future outcomes over the fast $10. In other words, by bringing the future to life with mental imagery, they were able to make decisions as if the future were now. Their decisions were more rational.

But what does money have to do with obesity? Well, it’s the same principle at work, which is what Epstein demonstrated in a second experiment. In this study, he simulated a typical experience of hard-to-resist temptation involving actual food—unhealthy food.  It was mid-afternoon—about an hour and a half after lunch, so plenty of time enough to get hungry—and the volunteers were asked to rate the sensory appeal of garlic bread, meatballs, fries, cookies, and so forth. Then, feeling hungry and focused on rich snacks, they were given free rein. For 15 minutes, they could eat as much of these foods as they liked, while ostensibly evaluating them for another purpose.

Again, the future thinking did the trick. As described in an article to appear in the journal Psychological Science, those who cued future memories during snack time consumed far fewer calories than did the controls.

It’s not entirely clear why such future thinking has this effect on self-control. It’s possible that being in the future—through imagery—somehow improves they ability to perceive the real value of delaying rewards. That is, we may know the value in the abstract, but it’s tough to make real-life decisions based on abstractions. When we actually put ourselves into the future, we’re experiencing the consequences of our decisions rather than merely calculating them.

Excerpts from Wray Herbert’s blogs—“We’re Only Human” and “Full Frontal Psychology”—appear regularly in The Huffington Post.

News > We're Only Human > For Obesity, the Future Is Now