News > We're Only Human > Days Of Our Lives, One Day At A Time

Anyone who has spent any time around the rooms of Alcoholics Anonymous has heard the phrase “stinkin’ thinkin.’” This folksy expression refers to certain attitudes and thought patterns—blaming, self-pity, negativity in general—that threaten the recovering alcoholic’s emotional sobriety and could, if unchecked, lead to relapse.

Not every recovering alcoholic chooses AA, but every recovering alcoholic is at risk of picking up a drink if such destructive thinking goes unchecked. Happily, for those seeking an alternative to 12-step programs, there is a well validated therapeutic approach with the same goals and similar tactics. It’s called Cognitive Behavioral Therapy, or CBT, and it’s been shown over many years to be effective with a variety of disorders, including substance abuse.

Unfortunately, CBT is not readily available to everyone who might benefit from the therapy. It’s rarely used in settings where addicts are typically treated, in large part because there are not enough well-trained therapists to meet the need. As a result, many alcoholics and drug addicts continue to suffer unnecessarily. 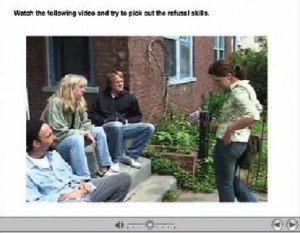 This disconnection got the attention of Yale University psychological scientist Kathleen Carroll, who along with several colleagues has been studying the potential of computer-assisted delivery of CBT to addicts. The scientists designed a program that uses computer games, cartoons, quizzes and other interactive features to teach the skills and strategies known to correct harmful thought patterns. At the core of the computer-assisted therapy is a series of videos, using professional actors and not all that different from TV soap operas, in which engaging characters negotiate high-risk situations. The characters encounter a situation or problem, and then demonstrate how they use target skills to get through it without drugs or alcohol. The program is user-friendly, requiring neither reading nor computer skills.

Carroll and her co-workers ran a pilot study with addicts who were seeking outpatient treatment for alcohol, cocaine, marijuana or opiate dependence—and usually more than one. Those who had access to the computerized therapy had longer continuous abstinence at the end of the trial and six months later. The group was small, however, and the results preliminary, so the scientists decided to carry out another, more ambitious, test of the therapy.

They deliberately chose a highly challenging population of addicts—about 100 cocaine-dependent individuals who were being maintained on a methadone clinic in New Haven, CT.  Not only is cocaine use one of the most intractable drug disorders, it is also linked to other serious health risks, including hepatitis C and HIV infection. All of the addicts, who had been using cocaine habitually for more than a decade, were stabilized on methadone at the time of the trial. Some just continued with the methadone maintenance program—which included a weekly group meeting—while others were randomly chosen to receive eight weeks of computerized CBT in addition.

The program offers a new teaching module, along with homework, each week, addressing commonly distorted thought patterns, decision making, and problem solving. Specific modules deal with cravings, how to refuse drug offers and peer pressure, and HIV risk reduction. Subjects completed about five of the seven modules on average, spending about half an hour on each, and most did at least one homework assignment. All of the subjects provided weekly self-reports about their drug and alcohol use, which were verified by twice-weekly urine samples and used as the study’s measure of success.

The results, which Carroll reported at the annual convention of the Association for Psychological Science in San Francisco this week, were very encouraging. Participants who received the computer-assisted therapy were significantly more likely to attain three or more consecutive weeks of abstinence from cocaine—a favorable benchmark for predicting longer-term abstinence.  These participants were also more likely to provide urine samples that were clean for all illicit drugs. And the effects appear to last: Participants in the computer group showed continuous improvement six months after treatment ended.

The key to success for CBT is repetition. To teach a patient cognitive control over his or her emotions—and the skills to apply this control in challenging life situation—cannot be accomplished in one or two sessions. Addicts especially have deeply engrained habits related to drugs and alcohol, and the lessons must be taught again and again. Perhaps the greatest virtue of these psychodramas, which does not show up in the outcome data, is the patients’ eagerness to come back. Like daytime soap opera fanatics, Carroll says,  addicts want to know how their favorite characters are faring with the patterns of stinkin’ thinkin’ they know all too well.

News > We're Only Human > Days Of Our Lives, One Day At A Time