Rising individualism in the United States over the last 150 years is mainly associated with a societal shift toward more white-collar occupations, according to new research published in Psychological Science, a journal of the Association for Psychological Science. The study, which looked at various cultural indicators — including word usage in books, trends in baby names, and shifts in family structure — suggests that a shift toward greater individualism is systematically correlated with socioeconomic trends, but not with trends in urbanization or environmental demands such as frequency of diseases or disasters. 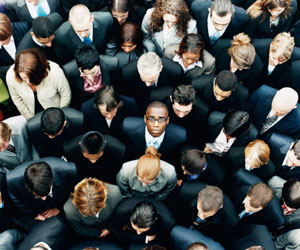 “Across many markers of individualism, social class was the only factor that systematically preceded changes in individualism over time, tentatively suggesting a causal relationship between them,” explains psychological scientist and study author Igor Grossmann of the University of Waterloo.

According to Grossmann, who conducted the research with co-author Michael Varnum of the Arizona State University, the study represents one of the first ever large-scale attempts to test various theories explaining cultural change in individualism over a time span longer than 30 or 40 years.

“Our motivation was to take on this task, pushed by the greater availability of “big data” in various governmental and private organizations — such as the U.S. Social Security Administration, Gallup, and the Google Books Library project — as well as recent advances in forecasting methods,” says Grossmann.

To tap into cultural indicators of individualism, Grossmann and Varnum looked at trends in baby names over time (from Social Security Administration data), changes in word usage in books over time (using the Google Ngram database), and shifts in family structure, including family size and prevalence of multigenerational households (using U.S. Census data).

And they examined data from sources like the U.S. Census Bureau and the Centers for Disease Control and Prevention to look at various socio-ecological factors that have been posited as contributors to individualism, including prevalence of infectious disease and disasters, rates of urbanization, changes in secularism, and trends in occupational status.

Across all cultural indicators, the researchers found evidence that individualism has been rising steadily over the last 150 years. For example, family size has decreased since 1860 and the ratio of multi-generational to single-generation households also declined from the 1880s through the 1980s. The frequency of individualist words used in published texts has risen since the 1860s, while the frequency of collectivist words has declined over the same period. And the uniqueness of baby names has risen for both boys and girls since the 1880s, with the percentage of children receiving one of the 20 most popular names declining over time.

“We were surprised that only one of the six tested cultural psychological theories was any good for statistically predicting changes in US individualism over time,” says Grossmann. “The only theoretical claim that we found systematic support for is the one suggesting that the rise in individualism is due to societal changes in social class, from blue collar to white collar occupations.”

The researchers note that these data do not allow them to draw a conclusive causal link between occupational status and individualism, but they do suggest that the other factors examined were unlikely to account for rising individualism.

Contrary to popular notions, the research indicates that increasing individualism is not a recent phenomenon.

“The data show that changes in individualism were present way before the Generation X and the Millennium generation, indicating that the magnitude of change in individualism was comparable in the late 19th and early 20th century as it is now,” says Grossmann. “This insight puts some of the pop-science claims about current youth in a historical perspective: Yes, current youth are different from older generations, but this seems to be a consistent phenomenon over time.”

The researchers are currently working on expanding this research beyond the United States, exploring the forces that may play particular roles in specific countries.

The present research was funded by Social Sciences and Humanities Research Council of Canada Insight Grant 435- 2014-0685 and by the John Templeton Foundation Science of Prospection grant, both awarded to I. Grossmann.