“Our research indicates that the visual system of older adults maintains a high degree of plasticity and demonstrates that training methods can be used to improve visual function,” explains psychological scientist G. John Andersen of the University of California, Riverside who co-authored the study with graduate student Denton DeLoss and colleague Takeo Watanabe of Brown University. 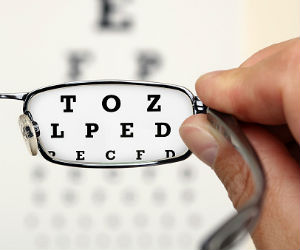 The participants came to the lab for 1.5-hour sessions over the course of 7 days. In general, each trial of the experiment involved looking at a striped visual stimulus and determining whether it was rotated clockwise or counterclockwise from its original orientation. The researchers varied the contrast of the stimulus across trials, altering how grainy or clear the image was.

Each day, the contrast threshold of the trials was calibrated to the participants’ previous performance so that they were training near the limit of what they could reliably detect. Participants were exposed to 750 trials on each training day, for a total of 3,750 training trials over the course of the study.

The data showed that visual training effectively eliminated the age deficit in contrast sensitivity. At the beginning of the experiment, younger adults outperformed older adults on the task; but the older adults improved with training, showing performance similar to that of their younger peers by the end of the 7 days.

Further analyses confirmed that these improvements stemmed from changes in visual processing in the brain and not changes in the eye.

“We found that the training effect was not due to factors such as dilating the pupils to let in more light to the retina,” explains Andersen.

“Given the short training period, the degree of improvement is quite impressive, particularly in the cases of near and far acuity, in which subjects were able to read an average of two to three additional letters on acuity charts after training,” the researchers write.

It’s important to note that these findings don’t shed light on visual function among adults suffering from age-related eye diseases, such as glaucoma or macular degeneration. Nonetheless, the findings could have broad relevance for the many millions of adults who experience age-related decline in visual processing.

The researchers hope to further explore the mechanisms involved in perceptual learning and whether the effects of visual training carry over to real-world tasks, such as driving.

This research was funded by National Institute on Aging Grant No. R01-AG031941.

Hi, Could you direct me where I can find the “exercises” for the eyes. I would like to do them. Thanks, John

Where can I find these exercises? My mother is 84 and is experiencing vision problems not related to her eyes.
Thank you