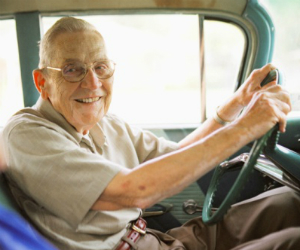 As we age, our capabilities behind the wheel change, and one of the greatest driving dangers for senior drivers appears to be traffic intersections. Older drivers are far more likely than other drivers to get into an accident at an intersection. According to data from the U.S. Federal Highway Administration, approximately 50% of accidents occur at intersections for drivers over age 50, compared to about 23% of accidents for people under age 50.

A team of researchers led by psychological scientist J. K. Caird of the University of Calgary studied people of varying ages to find out how the current standards for the timing of yellow lights might be impacting driving safety at intersections.

For traffic lights to operate safely, traffic engineers have to take the limitations of human perception into account. For example, traffic engineers typically account for 1 second from when drivers first notice the light change to when they begin to hit the brakes. For older drivers, it’s possible that the standard 1-second response time is too short — resulting in more accidents at intersections.

However, when older drivers did end up running yellow lights, they maintained their slow speed through the intersection. As a result, senior drivers were significantly more likely to be in the intersection when the light changed to red.

Surprisingly, giving senior drivers a longer yellow light didn’t necessarily improve driving safety.  The researchers found that older drivers were far less likely to stop at the intersection when they had the most available time to make a decision — around 3.5 seconds. In this condition, only about 75% of the drivers over 55 stopped, while nearly all of the younger drivers did.

The seniors did not show slower perception or response times than did their younger counterparts. So why were they responding differently at intersections?

One explanation may be that older drivers just have a greater desire to maintain their current speed. Overall, seniors showed less variation in their acceleration and braking throughout the driving simulation compared to younger drivers.

Based on these findings, Caird and colleagues concluded that although older drivers have adequate response times with current timing standards for yellow lights, other differences in behavior may be putting them at risk at intersections. Future research should look at whether there are measure that can be taken at intersections to better accommodate senior drivers.

The National Academies of Sciences, Engineering, and Medicine are initiating a consensus study on generational issues in the workforce. APS Members will play a central role in the leadership of the study. The endeavor will evaluate the behavioral science and business management and literature on generational attitudes and behaviors. More

Frustrated drivers are more likely to lash out aggressively at vehicles they perceive as having a lower social status. More