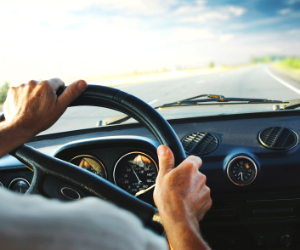 We may take it for granted, but exactly how we steer a car has remained a mystery to researchers for nearly 70 years.

The prevailing theory for how we steer towards a target was initially developed by British researcher Arnold Tustin in 1947. Tustin was a pioneer in the engineering field of control theory which focuses on the interactions between humans and complex machines. According to Tustin’s theory for steering, drivers gently and continuously follow the road with the steering wheel in a linear fashion, known as “tracking in control theory.”

But newly published research from behavioral scientists Ola Benderius and Gustav Markkula of Chalmers University of Technology in Sweden suggests that steering is based on a surprising pattern of movements that resemble reaching.

“We were able to use the theory to explain what researchers had been trying to solve for a long time. This was the answer to the previously inexplicable jerkiness in the control signal. Rather than looking upon steering as continuously following the road, steering corrections seem to be applied in a very predetermined manner,” said Benderius.

While they were attending a lecture on neurocognition and the behavioral theory of reaching, Benderius and Markkula recognized the motor pattern of reaching as similar to the one they’d seen in the steering behavior in drivers.

“We immediately recognized this pattern from our measured steer signals,” says Benderius. “It was a bit of a eureka moment. Was it possible that this basic human behavior also controlled how we steer a car?”

In analyzing the data, the researchers developed a mathematical model that makes it possible to predict what drivers are going to do with the steering wheel before they do it.

“It is possible to predict how far the driver is going to turn the wheel, right when the person starts a wheel-turning movement. It’s like looking into the future,” said Benderius.

This discovery, presented at the Proceedings of the Human Factors and Ergonomics Society 58th Annual Meeting, could lead to the development of automated safety systems for cars that can enhance driving safety.

For example, as a fatigued driver begins to run off the side of the road, he or she might dangerously overcorrect the steering wheel leading to an accident. In the future cars may include support systems that can identify these misjudgments and intervene before they happen, potentially preventing serious accidents.