News > Minds on the Road > Risky Business: Teens Brains Behind the Wheel 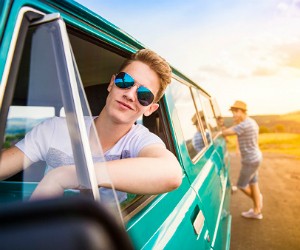 Teen drivers are notorious for their bad decisions behind the wheel. According to the US Centers for Disease Control, the risk of car crashes is higher among 16-19-year-olds than among any other age group. In fact, per mile driven, teen drivers are nearly three times more likely than drivers aged 20 and older to be in a fatal crash.

You might think that a more developmentally mature brain would guarantee more sensible decision-making in teen drivers, but a new study suggests just the opposite. A team of researchers from the University of Turku in Finland, led by Victor Vorobyev, found that teens more prone to risky behavior in a driving simulation game actually showed signs of more advanced brain maturation.

Evidence suggests that the brain structures that process feelings of reward mature faster than neural circuits involved in planning ahead and assessing risks. Hence the notoriously steep car insurance cost for teen drivers.

Using functional magnetic resonance imaging (fMRI), the research team investigated what makes the brains of risk-taking teens different than their more law-abiding peers.  The study was published in the journal PLoS ONE.

Once in the lab, the participants were asked to play a stop-and-go driving simulation game. They had to “drive” through 20 traffic intersections as possible within 5 minutes. But, as their car approached an intersection, they were forced to make a quick decision as the light turned yellow: Stop before the light turns red (adding 3 seconds to their final time) or barrel through a yellow light and risk a crash (a potential 6 second penalty).

The participants were give two full-length practice sessions of the game before being tested while lying in fMRI scanner. Once in the scanner, each participant completed two runs of the task just as they had in the practice session. But, in a surprise manipulation, the students were also told that their performance on the last two trials would be publicly compared to their classmates’ results and presented at school.

The experimenters hypothesized that the more cautious drivers—those who stopped more often for the yellow light—would have relatively more “mature” brains. But they were wrong: A structural analysis revealed that the group of risky drivers had more connective white matter tissue compared to the group of safer, more deliberate drivers. The neural fibers that make up white matter act like the brain’s “superhighway,” allowing signals and communications within the brain. More white matter is an indicator of better neural efficiency and maturation.

The personality tests were not a good measure of which students would drive recklessly in the game. However, both the high- and low-risk groups took more risks and spent more time making decisions when they thought they were being compared to their peers.

“Given the elevated reward value of peer interactions in adolescence the presence of peers may further sensitize the reward system to potential rewards of risky behavior,” Vorobyev and colleagues explain.

More testing with larger samples is still necessary before making any general conclusions about the link between risk-taking and white matter. The researchers hope to expand this research into educational methodology, examining possible links between risk-taking, intelligence, and learning.

News > Minds on the Road > Risky Business: Teens Brains Behind the Wheel