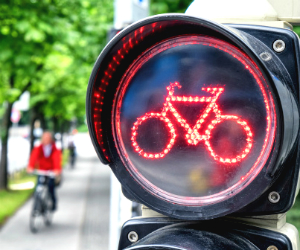 Much like motorists, cyclists don’t always obey traffic laws. From Melbourne to New York City, urban dwellers have grumbled about encounters with bicyclists who brazenly zip straight through red lights without even a glance at oncoming traffic or pedestrians in the crosswalk.

But while risky behavior in motorists has been extensively studied, relatively little research has been published on similar behavior for bicyclists.

“The red-light running is often reported as highly dangerous, but we are not exactly sure who the red-light runners are, what factors affect their red-light running decisions, and what the behavior characteristics are,” writes Wu and colleagues. “Answers to these questions will definitely help us improve road safety of two-wheelers.”

After carefully reviewing and coding their footage, Wu and colleagues found that a little more than half, around 55%, of the 451 cyclists caught on camera crossed the intersection against a red light.

Intriguingly, the researchers found that cyclists were most likely to run a red light when they were alone at the intersection.

“The smaller the group size, the less people waiting at the stop line, and the more other riders crossing against the red light, the more likely a rider would run a red light,” Wu and colleagues report in the journal Accident Analysis and Prevention.

The researchers suggest that the influence of social norms may be playing a role in riders’ decisions to flout the rules.

Previous research has found that people feel more committed to social norms when they are in groups and are, therefore, less likely to break laws when there are other people around. When cyclists are riding alone, they may be more likely to violate traffic laws because they’re less concerned with potential social criticism from onlookers.

The researchers also found that cyclists were more likely to run red when other cyclists were already doing so, even when they controlled for the amount of oncoming vehicle traffic.

“This may be explained by the psychosocial phenomenon known as diffusion of responsibility,” Wu and colleagues explain. People feel less responsible for violating social norms (e.g., traffic law) when they see someone else already doing it.

Additional factors were also associated with higher rates of red light running – for example, male cyclists were significantly more likely than females to run a red light, and middle-aged and younger cyclists were nearly 8 times more likely to run red compared to seniors.

Because the study relied only on field observations the researchers couldn’t determine the underlying motivations for red-light running behavior. Future studies utilizing questionnaire surveys or lab-based experiments could help clarify the decision-making process that leads riders to run red lights.

“Safety education and other intervention programs may use the positive influences of groups to promote law-obeying behavior since our study found that other road users’ behavior may influence riders’ red-light infringement,” Wu and colleagues conclude.