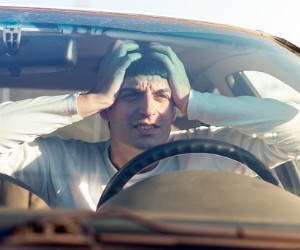 Driver distraction is one of the leading causes of motor vehicle accidents. In 2013 alone, 3,154 people were killed in motor vehicle crashes involving distracted drivers, according to the U.S. Department of Transportation.

Obvious distractions, like talking on a cell phone, can contribute to accidents by physically diverting a driver’s attention away from the road. But scientists are finding that more subtle emotional cues in our environment can also have a potentially dangerous influence on attention and, ultimately, our driving behavior.

In one recent study, psychological scientists Michelle Chan and Anthony Singhal of the University of Alberta found that emotional content from billboards influenced driving behavior; after seeing billboard ads emblazoned with negative words, drivers’ speed and reaction times slowed down.

And in a new study, Chen and Singhal found that hearing emotional words while driving can also cause changes in a driver’s behavior.

For the study, a group of 25 participants listened to a list of 25 words—20 words reflected emotionally neutral, negative, or positive content and five words indicated animal names. Participants were instructed to press a button on a response pad as quickly as possible whenever they heard a “target” animal word. Each participant completed this task sitting quietly in a room, and also while they were behind the wheel in a driving simulator.

Participants’ brain activity during the task was monitored via electroencephalogram (EEG), which uses a series of electrodes placed on the scalp to detect and record electrical activity in the brain. The EEG allowed Chan and Singhal to observe how much processing power the brain was using in response to hearing different words.

The results confirmed that hearing, as well as seeing, emotional words can have a significant impact on the way we drive.

When participants overheard negative words during the driving simulation, their speed decreased and they tended to drift and veer from their lane. Overhearing positive words, on the other hand, was associated with safer driving behaviors and faster response times.

The human attention system only has so much capacity, and when attempting to perform two tasks at the same time—say, driving and talking or listening—there is competition for which task gets our limited attentional resources.

Because humans are hard-wired to be very sensitive to signs of danger in the environment, stimuli that provoke a negative emotional reaction quickly grab our attention, in case we need to fight or flee. This helps explain why negative words seemed to hijack drivers’ attention so much more than neutral or positive words.

Results from the EEG revealed that people showed less brain activity in response to the emotional stimuli when they were in the driving simulator than when they were sitting quietly at a desk.

“These findings suggest that auditory distraction during driving can increase cognitive workload and that negative emotional auditory content may impact one’s ability to drive safely,” Chan and Singhal write in the journal Safety Science.

According to Chan and Singhal, one next step in researching the influence of emotional content on driving is to use more realistic simulations. Researchers could, for example, have drivers listen to radio broadcasts or music with different emotional messages while engaged in more complex driving scenarios.