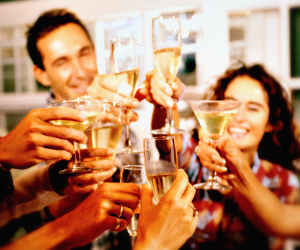 This New Year’s Eve many partygoers will be ringing in the New Year with a little more to drink than the traditional Champagne toast at midnight, making the holiday one of the deadliest times of the year to be on the road.

According to the Insurance Institute for Highway Safety, New Year’s Day is the worst day of the year for fatal crashes involving impaired drivers, with data from the National Highway Traffic and Safety Administration showing that around 40% of the fatalities over the New Year’s holiday involve a drunk driver.

Many drivers believe that once they stop drinking for the evening they’re safe to hit the road, but alcohol continues to affect cognition and motor skills long after that last drink has been downed.

A new study from psychological scientists Samuel G. Charlton and Nicola J. Starkey of the University of Waikato in New Zealand shows that our willingness to get behind the wheel often recovers faster than our sobriety, especially when we’re drinking socially.

“Drivers may be more likely to judge that they are fit to drive even though crucial aspects of their driving performance are still impaired,” Charlton and Starkey write in the journal Accident Analysis and Prevention. “Social drinking may actually make explicit judgments of intoxication even more difficult and decisions about whether and when it is safe to drive should be made prior to drinking.”

The researchers tested 44 drivers in a lab setting designed to mimic the way people might actually drink while they’re at a small party. Participants in groups of three were served drinks in a lounge room with a music system, sofas, and games where they could drink together and socialize.

After the researchers recorded each participant’s baseline performance on cognitive tests and a driving simulator task, the participants were allowed to drink together at their own pace in the lounge until they hit their target BAC levels. They completed a series of cognitive tests and simulated driving tasks throughout the experiment as their BAC levels ascended, plateaued, and descended over the course of about 4 hours.

As expected, those who drank the most had the worst performance on cognitive tests and in the driving simulator.

However, the data also showed that participants were more impaired on the tasks at the end of the party than at the beginning, even after their BAC levels had descended back below the legal limit.

“Participants’ control over their driving speeds and their maze learning error rates increased such that performance on the descending limb of the intoxication curve were worse than the ascending limb, even though their BAC levels were the same at these two points,” says Charlton and Starkey.

Drivers in the medium and high alcohol groups significantly underestimated how many drinks they had consumed by the end of the experiment, while those in the placebo group overestimated their alcohol consumption on average. These findings suggest that the party-goers who drink the most are less likely to be aware of how impaired they are at the precise moment that they are heading to their cars for the drive home.

The researchers were surprised to find that those in the social placebo group rated themselves significantly more intoxicated and even performed slightly worse on some driving tasks when compared to a placebo group from a previous experiment that had consumed alcohol alone.

“From a practical standpoint, the results make it clear that under ecologically representative conditions drivers are extremely poor at self-evaluation of alcohol intoxication and impairment,” Charlton and Starkey write.