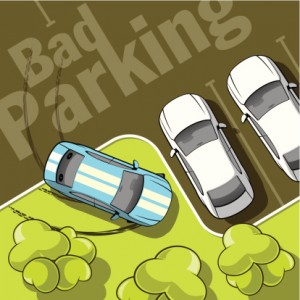 If you’ve stacked up a lot of speeding tickets or parking fines in the last several months, you might consider how the size and interior of your vehicle is contributing to the points on your driver’s license.

Research has shown how our posture can significantly affect our thoughts, feelings, and behaviors. And a study published last year showed that these postures can affect our conduct behind the wheel.

The study, led by behavioral researcher Andy J. Yap of the Massachusetts Institute of Technology, involved a series of experiments and revealed that open postures boost our feelings of power, and those feelings can cause us to act dishonestly. One of the experiments suggests that we’re more likely to break traffic laws when we our car interiors are roomy.

In that trial, Yap and his colleagues recruited college students to participate in a study that incorporated a driving simulator set up with a video game console. The students were randomly assigned to sit in an expansive or constricted driver’s seat, and play the racing game “Need for Speed: Hot Pursuit.” They were offered a chance to win $10 if they could complete the race within 5 minutes, but they had to stop and count to 10 after a collision with any object in the simulated course. If they violated this rule, however, it shortened their race time and thus help them win the money.

Once the race was over, the participants ranked how powerful they felt on a scale of 1 (not at all) to 5 (extremely).

Results showed that participants who sat in expansive seats drove somewhat more recklessly compared to those who sat in contractive seats. In fact, the students in the spacious seats were more likely to hit-and-run than those in confined perches.

Yap and his team then decided to explore this ergonomic effect in a real-life setting. They had research assistants log instances of double-parking in a section of New York City.  The researchers recorded the make and model of each vehicle, then reviewed the car manufacturer’s websites to calculate the size of each vehicle’s driver’s seat.  As predicted, vehicles with larger driver’s seats were significantly more likely to be double-parked.

In reporting on their findings in the journal Psychological Science, the researchers acknowledge that the ergonomic effect doesn’t lead everyone into dishonest behavior. Recent research has found that power actually enhances ethical thinking among people with a strong moral identity. But they say future research might explore ways in which physical environments, such as car interiors, can be designed to promote ethical behaviors.