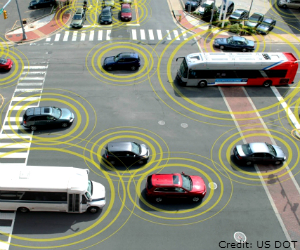 Perceptual errors, when a driver looks but fails to register pedestrians or other vehicles, are one of the leading causes of car accidents. Sometimes called “looked-but-failed-to-see” accidents, because a driver fails to notice another vehicle even though they looked in the right direction. These errors are particularly common and dangerous in accidents involving bicycles and motorcycles.

On the road, drivers face many simultaneous demands on their attention: pedestrians, traffic light changes, other cars, and following GPS directions. It’s impossible for a driver to focus their full attention on all of these events at once. For example, a driver getting ready to make a right turn might easily overlook a pedestrian crossing on the left side of the street.

As cars are increasingly coming with more automated features, automatic warning systems may soon be able to help alert drivers to potentially dangerous situations before they even happen. While these types of sophisticated systems aren’t commercially available yet, we may not have too long to wait.

The automaker Volvo is planning on having cars and trucks with advanced warning technology in showrooms in the next five years. The new technology system will use cameras, computers, and GPS to continually analyze a 360-degree view of a car or truck’s surroundings in order to warn drivers of potential hazards. But exactly how to design these warnings to the most effective and helpful for drivers?

To find out what kind of warning system might best help prevent accidents, psychological scientists Julia Werneke and Mark Vollrath of the Technical University of Braunschweig in Germany compared two advance warning strategies: early and late.

When drivers receive an early warning, long before a potentially dangerous encounter, they’re prompted to be generally alert for trouble before it’s even visible (a top-down warning). On the other hand, when drivers receive a warning that draws their attention to a specific dangerous event already in view, they might be able to automatically shift their attention more quickly to avoid a crash (bottom-up warning).

For the study, the researchers recruited 48 participants to complete a scenario in a driving simulator. After about 25 minutes of driving through urban streets, participants faced a critical event that could lead to an accident: After making a right turn at an intersection, a parked car on the right side of the street suddenly pulls out into the road in front of the driver.

For those in the early warning group, a flashing orange warning circle appeared on the screen as the driver approached the intersection—before the parked car was even in view.

In the late warning conditions, the same warning signal appeared on the screen just after the driver completed their right-hand turn, but before the parked car began to pull out into the street. For some drivers, the warning appeared directly in front of the parked car in a “head on” group of drivers; for others, the warning appeared in the driver’s peripheral vision off to the side of the screen. Previous studies have shown that warnings in the peripheral vision can lead to a very fast, automatic shift in attention.

The drivers who received an early warning were able to prevent the crash because they adopted safer driving behaviors, like driving at lower speeds and making more complete stops.

“Here, most collisions could be avoided due to drivers’ adaptation of their driving behavior toward safer driving. They waited longer at the intersection before turning and finally turned with a lower velocity,” Werneke and Vollrath write in the journal Accident Analysis and Prevention.

While the late warnings weren’t as effective as early warnings in preventing accidents, Werneke and Vollrath suggest that future studies should investigate whether different factors, for example using sounds instead of visual cues, might improve their effectiveness.