News > Minds on the Road > A Psychological Solution Prevents Rubbernecking 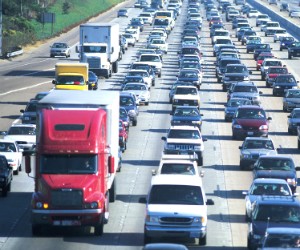 People just can’t seem to help themselves when it comes to gawking at accidents and car crashes. Rubbernecking—or slowing down to scope out an accident on the side of the road—is a major cause of traffic jams. The bright lights and colors on emergency response vehicles are designed to grab people’s visual attention. But, these attention-grabbing qualities can also make scenes on the side of the road unintentionally distracting for drivers.

As part of an effort to keep drivers’ eyes on the road and feet on the gas pedal, the government in the UK is already investing in incident screens to block drivers’ wandering eyes. The idea is that employing “nothing to see here” screens will lead fewer drivers will slow down to look, and traffic will keep moving while emergency response crews minister to those involved in the accident.

A new study conducted by a group of psychological scientists from the University of Central Florida recently put this idea to the test. Then-undergraduate psychology student Nicholas P. Colon, along with graduate student Michael A. Rupp and psychology professor Mustapha Mouloua, used eye tracking technology to analyze exactly how well these crash barriers keep drivers’ eyes on the road.

A group of 54 college students was recruited to drive through a series of traffic scenarios in a driving simulator while wearing the eye-tracking goggles. Participants were randomly assigned to one of three scenarios: a full barrier completely blocking the view of the accident, a partial barrier obscuring most the scene, and no barrier at all. While driving down a straight lane at 55 miles per hour, participants in each condition encountered a severe traffic crash on the side of the road including police cars, ambulances, and fire trucks, as well as smoke and fire.

As might be expected, drivers spent more time looking at the crash scene when it was visible. However, completely obscuring the scene with a barrier drastically reduced drivers’ glances to the side of the road.

The eye-tracking equipment provided the amount of time and frequency participants’ eyes focused on different parts of the scene and the road. When the view of the accident was fully blocked by a barrier, drivers only spent an average of about 4 seconds eyeing the side of the road. In contrast, they spent an average of around 12 seconds “rubbernecking” in the no-barrier and partial-barrier conditions.

Interestingly, only partially obscuring the accident did little to prevent signs of distraction. One possible explanation, the research team suggests, is that the mere indication of a crash is enough to cause participants to look away from the road to assess the side of the road.

Incident screens are already being used in roads around the world. Pilot studies conducted by the Highways Agency in the UK found that the incident screens were an effective way to prevent driver distraction and keep traffic moving after an accident. In the US, local police departments are starting to invest in screens manufactured by a company called Stop Rubbernecking, LLC.

News > Minds on the Road > A Psychological Solution Prevents Rubbernecking