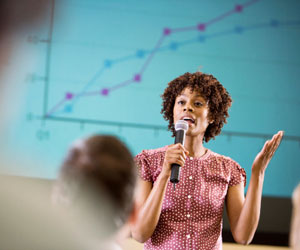 People may see you as powerful based not only on your job title or your income, but on the very words you use in conversation and speeches.

That’s the conclusion from a new study on how power is signaled in interpersonal communications. Building on studies showing that people in positions of power use more abstract language (such as interpretive or visionary descriptions) than those with less clout, a trio of psychological researchers explored how people who use abstract language are perceived by others.

Over seven experiments, Cheryl J. Wakslak and Albert Han of University of Southern California and Pamela K. Smith of University of California, San Diego, found that study participants perceived individuals as more powerful when they used abstract language as opposed to concrete (detailed or specific) words.

Across the experiments, the researchers presented participants with various types of speech—phrases, sentences, short paragraphs—in a variety of contexts, and asked the participants to evaluate the communicators on various traits, including power, warmth, competence, and thinking style. In some cases, participants read descriptions of negative behaviors while others read about positive behaviors.

In one of the experiments, for example, participants read quotes from political candidates involving current trends or events, such as the economy and the Arab Spring.  Participants were asked to rate their impression of the unnamed politicians based on the way they communicated their views, rather than on the views themselves.

As predicted, the politicians were rated as more powerful, and were viewed more as leaders, when quotes attributed to them were abstract versus concrete.

Across the entire series of studies, the use of abstract language that captured the gist or meaning of an event, rather than the details of what happened, led a speaker to be perceived as more powerful compared to concrete language. The experiments did not yield a similarly consistent effect on people’s perceptions of warmth and competence.

Wakslak, Smith, and Han say the findings could provide some important insight to people in business, as well as politics, who want to project a powerful image. Speakers who use concrete terms to show off their knowledge will likely come across as less powerful, and therefore less able to lead, they write in the Journal of Personality and Social Psychology.

“Rather than focusing just on speaking to the right kind of people, or covering the right topics, we suggest it is important to think about the words one uses,” they say.