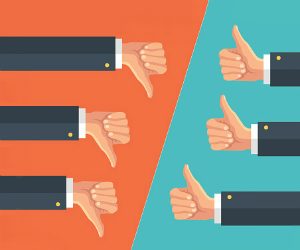 A new study demonstrates that shaking a negative first impression is often diabolically difficult, providing just one more reason to make sure that you show up on time for your next job interview.

“Moral and immoral behaviors often come in small doses. A person might donate just a few dollars to charity or cheat on just one exam question,” explain University of Chicago psychological scientists Nadav Klein and Ed O’Brien. But how many positive or negative acts must a person undertake before we change our minds about someone?

Across five experiments, Klein and O’Brien found that this moral tipping point is asymmetric — a moral improvement takes a lot more work for us to notice compared to a moral decline, even if the evidence is we observe is the same in each case. In other words, “it is apparently easier to become a sinner than a saint, despite exhibiting equivalent evidence for change.”

In one experiment, Klein and O’Brien attempted to measure the moral tipping point – the number of behaviors that will change our assessment of someone. A group of 201 participants took part in an online study in which they read a scenario about an average office worker named Barbara. All of the participants were told that Barbara’s personality was pretty neutral; most of the time her behavior towards her colleagues was inoffensive, but occasionally she was especially nice (e.g., holding the door, giving compliments) while other times she was kind of a jerk (e.g., cutting in line, spreading gossip).

When Barbara’s behavior turned mean, it only took a few weeks for participants to conclude that she had taken a turn for the worse. However, it took many more weeks of positive behavior to convince people that Barbara was changing for the better.

In another online experiment, 200 female participants read a very similar scenario, but this time the information about their coworker’s behavior changes was presented in increments. After reading that the coworker had shown a change in behavior for a whole week, participants were asked whether they were convinced this person’s moral character had “officially” improved or declined. If they responded “yes,” the session ended. If they responded “no,” they were told the behavior had continued for another week and were asked if the personality change had tipped.

Again, the results showed that people were much quicker at concluding the change in behavior showed a moral decline and much slower at acknowledging moral improvement.

A recent article published in Perspectives on Psychological Science demonstrates just how influential small acts can be in our assessment of another person’s morality. In one experiment, participants were told about a company hiring a new CEO. One of the candidates requested an expensive marble table as a perk. Participants found this request so morally appalling that they “reported a preference for paying an additional $1 million in salary to a different job candidate just to avoid hiring a candidate whose salary request included a $40,000 marble table.”

Participants viewed a candidate who asked for such perks as more likely to act on his own selfish interests rather than the good of the company.

In their article, Klein and O’Brien argue that it’s important to be aware of this strong bias against negative information. Because the threshold for forming negative impressions is much lower than positive ones, we may want to be more open to giving people opportunities to redeem themselves after a bad first impression.