By the time Marissa Mayer took over a struggling Yahoo! and Meg Whitman rushed into aid a fading Hewlett-Packard, the term glass cliff was well-ensconced in the businesswoman’s lexicon. A steady stream of psychological research was showing that women are indeed more likely to be tapped for corporate leadership positions during times of crisis, when the risk of failure is at its highest. 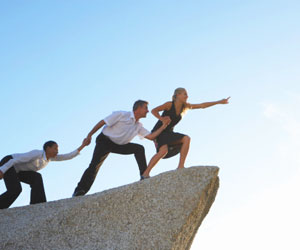 The widespread assumption is that feminine leadership traits, such as being understanding and tactful, work better under such circumstances.

Some psychologists, however, suggest that the “think crisis—the female” association fuels a form of sexism, in which where men are setting women up to take an inevitable fall. But are women simply more inclined than men to take on these “fix-it” roles?

In a pair of studies last year, European psychological scientists found evidence to the contrary.

Led by Floor Rink of the University of Groningen in the Netherlands, the research team found that women tend to evaluate precarious leadership roles more negatively than men do.  But they’re more likely to accept those challenges if they believe they’ll have social resources—the acceptance and support they receive from colleagues and employees, for example.

The results indicate that gender stereotypes not only sway the way women and men behave at work. It can also influence which leadership positions they take on during an organizational crisis.

News > Minds for Business > Tapping Leaders for a Crisis: Are Women Better At Fixing the Problems?