Entrepreneurship is a risky endeavor. Of all new firms, around one-third will close within the first two years and over half will have closed within their first four years. However, one thing that has been shown to greatly 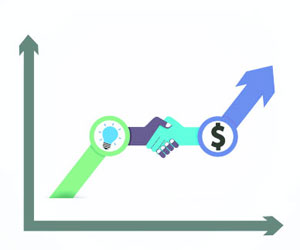 improve the odds of success for new businesses: face-to-face networking.

A team of psychological scientists, led by Jeffrey M. Pollack of North Carolina State University, investigated how different approaches to networking might end up impacting the bottom line for entrepreneurs.

In a recent study, Pollack and colleagues hypothesized that even though all entrepreneurs have the same ultimate goal of making more money, they might be utilizing different strategies for balancing risk and security in their networking styles.

For example, someone more inclined to “play it safe” might focus on interacting with a select group of people they already know, rather than wasting time and effort on new contacts. Whereas someone who is more focused on “playing to win” is willing to take a chance on seeking out new contacts indiscriminately.

The researchers suspected that the “playing to win” individuals would be doing more schmoozing, which could help them make more money through their larger pool of contacts.

Study participants were recruited from a national business networking group that meets weekly with the explicit goal of sharing leads and referrals for new clients and business opportunities. Through an online questionnaire, participants were asked about their networking style and how many face-to-face meetings they had with other members of the group.

The results showed that “play to win” entrepreneurs interacted more frequently with more members of the networking group compared to their “play it safe” peers. More networking, in turn, was associated with increased revenue.

Results from the study showed that more frequent networking was positively associated with increased revenue from networking group contacts. The networking group already tracked how much money members made due to referrals from other group members, which allowed participants to be very accurate in attributing which contacts were providing the additional income.

“Because the life expectancy of an entrepreneurial venture is likely to be short,” Pollack and colleagues write in the journal Social Psychological and Personality Science, “identifying ways to help entrepreneurs understand how to increase their chances for success is of considerable practical importance.”