Delivering bad news to your boss or your shareholders is inherently nerve-wracking. But for some General Motors’ executives, braving a little discomfort could have saved lives.

A flawed ignition switch in the Chevrolet Cobalt and several other small GM cars has been blamed for at least 13 deaths, with the defect suddenly shutting off cars, stiffening brakes and power steering, and disabling air bags. The company has issued a massive recall, but its long delay in alerting customers about the switch problem could cost it hundreds of millions of dollars in fines — all because, according to The Washington Post, of a corporate culture focused on cutting costs, bolstering its image, and avoiding the dissemination of bad news. 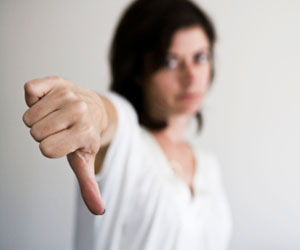 That culture isn’t unique to GM managers. People seem to naturally cringe at the prospect of delivering dismal quarterly results, lackluster sales numbers, or news about a production error. And when they have to disclose the bad news, they tend to deliver the message in rather counterproductive and confusing ways — sometimes yielding dire results.

Psychological scientists Angela Legg and Kate Sweeny decided to examine the way people deliver bad news — specifically, the sequence in which they report a good news and bad news together. In a series of experiments with college students, Legg and Sweeney found that information recipients overwhelmingly prefer hearing bad news first, while news-givers prefer to start off with the good news. Essentially, we focus primarily on our own comfort level when delivering news instead of considering the recipient’s preferences and concerns. Ultimately, this can lead to the most important pieces of information being downplayed and potentially ignored.

Legg is now an assistant professor of psychology at Pace University, but she conducted her research with Sweeny while she was a graduate student at the University of California, Riverside. In the first experiments, the researchers randomly assigned participants to one of two groups and told them they would either be giving or receiving the results of a bogus “personality test” that supposedly revealed both positive and negative traits. Then they were asked which set of news — the good personality traits or the bad — they wished to deliver or receive first and why.

A slight majority of the news-givers said they’d rather lead with the good news, generally because they were uncomfortable delivering bad news first. But more than three-fourths of the news-recipients said they would prefer to hear the bad news first, essentially so they could “end on a high note.”

The researchers took a similar approach in a second experiment, but this time news-givers actually delivered the information about the personality test results. The scientists also split the news-givers into three difference conditions. One group was told they could deliver the bad and goods in the sequence of their choice. A second group was asked to keep the news-recipients perspective in mind when deciding how to deliver the information. And a third group was warned that the news-recipients might feel hurt or upset when hearing about the negative traits that showed up in the test results.

As expected, a large majority of news-givers who got no instructions on the sequence of their information delivery led with the good news. But most of the participants who were prompted to feel empathy toward the recipients actually delivered the bad news first.

Legg and Sweeny repeated this study design for a final experiment, but this time participants completed a survey about their mood and degree of worry. Then, to assess how behavior might be affected by the news sequence, the researchers asked those participants whether they preferred to do a mindless task (stapling papers) or to watch a short video about how to improve their personalities.

Participants who received the bad news first showed an improved mood and decreased worry after they received the subsequent good news — but also were more likely to opt for stapling papers instead of pursuing some self-improvement. The opposite effect occurred in participants who first got the good news. So although it was unpleasant to hear, bad news, when delivered last, prompted a productive response.

This all suggests that it’s never wise to bury bad news, but the timing in the delivery is critical. If you want to minimize the emotional impact on the listener, better to get the bad news over with before delivering the good news. But if you want to prompt a person to take action, whether its improving their job performance or issuing a product recall, ending with the bad news may actually be more effective.