News > Minds at Work > The Creative Genius Within: Learning From Leonardo 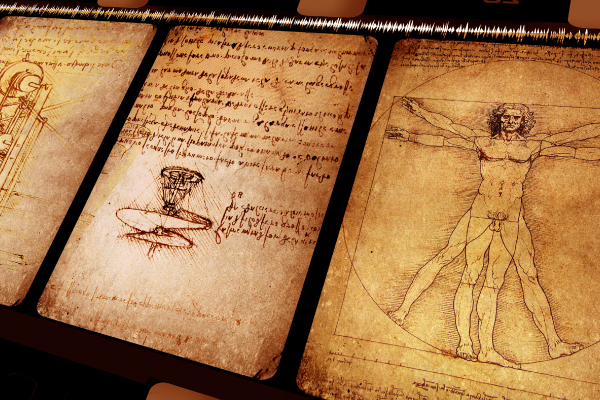 Creative ideas often seem to come out of thin air, but bringing them to life involves a sequence of conscious and controlled steps. Even Leonardo da Vinci, one of the most famous scientists, painters, and inventors of all time, produced more than 500 drawings and 35,000 words on the topic of flight, yet it is doubtful that his ideas for human-powered flying machines would have succeeded, given what we now know about the limitations of human muscle force.

However, da Vinci’s extensive documentation of his ideas paved the way for the invention of airplanes and helicopters some 400 years later. Moreover, those notes and drawings could still spark and nurture a great many new creative theories to come. In fact, according to an article recently published in Perspectives on Psychological Science, da Vinci’s creative process made use of general psychological processes common not only to geniuses like himself, but to every human being.

“Creativity has long been attributed to genius or great talent—characteristics one is believed simply to be born with,” wrote C. Dominik Güss and Sarah Ahmed (University of North Florida) and Dietrich Dörner (Otto-Friedrich Universität Bamberg, Germany). “Although we acknowledge that people differ in the extent of their talent, our assumption is that every human being is capable of creativity and already using some aspects of creative thinking one way or another and that the creative process follows steps similar to those of ordinary motivational and cognitive processes.”

“How did Leonardo da Vinci come up with these two ideas of flying machines?” Güss and colleagues asked, referring to two prototypes from da Vinci’s notes: the “ornithopter,” meant to mimic the flight of birds or bats, and the helicopter, also called the aerial screw or screw air. On the basis of those notes, they identified nine iterative stages of the creative process according to their interpretation of da Vinci’s own creative process.

The nine nonlinear stages all relate to motivation and cognition, the researchers explained, and provide “clarification and more detailed descriptions of the creative subprocesses” absent from previous models of the creative process, including Wallas’s four-stage model (1926), which comprises preparation, incubation, illumination, and verification.

The other stages identified by Güss and colleagues are incubation and forgetting; overinclusive thinking, latent inhibition, and illumination/insight; and testing and working out details (schema elaboration). These involve setting problems aside and allowing the mind to rest, indulging seemingly unrelated distractions that may lead to “aha!” moments of discovery, and working out the messy details of the idea in question—in da Vinci’s case, for instance, the mechanical details of the ornithopter.

“None of us is Leonardo da Vinci, but all of us are a little like him,” the researchers concluded. The creative process “is at the heart of human intelligence, of the ability to invent, solve problems, and adapt to new situations.”

News > Minds at Work > The Creative Genius Within: Learning From Leonardo