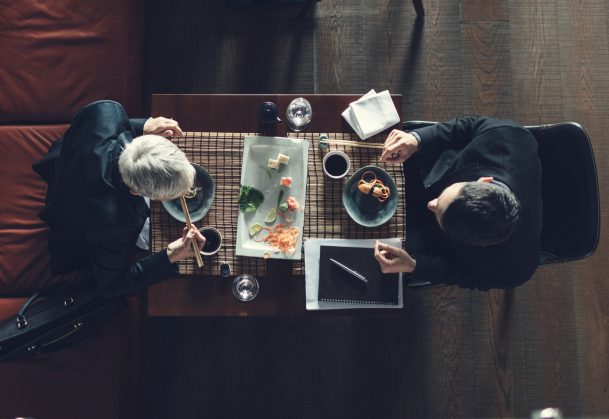 Lunch was once a ritualized part of the work day—a meal where deals were made, partnerships forged, and office friendships solidified. With the advent of email, telecommuting, and heavier workloads, many professionals now eat a sandwich or yogurt at their desks, treating the lunch confab as a luxury rather than a vital part of doing business.

Research supports the notion that eating with others can facilitate social connection and cooperation, both professionally and personally. But research suggests that how food is consumed at the lunch table could also make a difference in whether you close the big sale or establish a key partnership.

Behavioral scientists Kaitlin Woolley of Cornell University and Ayelet Fishbach of the University of Chicago decided to take a deeper look at the effects of shared meals on cooperation. They hypothesized that consuming a family-style meal, in which dishes are typically shared around the table (common in restaurants serving food from Asian countries), would boost cooperative spirits because it involves coordinating the allocation of resources.

Woolley and Fishbach tested that hypothesis in a series of experiments. For the first study, they recruited 200 undergraduate and graduate students and divided them into pairs, making sure that the pairings involved complete strangers. Ahead of the experiment, a research assistant weighed out food that would be offered to the participants. The separate-consumption condition included two pairs of a 20-gram tortilla chips bowl and a 25-gram salsa bowl, which were placed across a table from each other. The shared-consumption condition included one 40-gram bowl of chips and a 50-gram salsa bowl placed at the center of the table.

The paired strangers sat across the table from each other and they were told that the study was investigating how hunger impacts decisions. They learned that they would be eating a snack before completing a decision-making game that would include the possibility of a performance-based financial reward.

Within each pair, one person was randomly assigned to play the role of a union representative and the other to play a management role. Their goal was to settle on an hourly wage within 22 rounds — with each round representing a day in the negotiation — and a strike was set to ensue if a deal wasn’t reached by the end of the second round.

Participants were instructed not to talk during the negotiation, but to silently exchange bids over the wage rate until they reached a round in which management’s offer was equal to or higher than the union’s offer. The researchers measured cooperation by the number of strike days that passed before the pair reached an agreement; each player also received an individual score based on the agreed-upon wage rate and total number of strike days in their negotiation, with their role and condition in the game factored in. The participants were not told how the scores, and corresponding compensation, were calculated.

As predicted, the researchers found that the pairs who shared chips and salsa from the same bowls went into fewer days of strike, a sign of better cooperation, than did pairs with players who ate from separate bowls. Analysis of the results also indicated that participants in the shared-bowl condition earned more in performance-based pay than did those in the separate-bowl condition.

Woolley and Fishbach tested their hypothesis again using different games and conditions, including pairing participants with friends rather than strangers. The researchers consistently found a connection between sharing a single source of food and cooperative behavior.

The scientists acknowledge that shared experiences don’t have to involve food to foster cooperation. Armies train by marching in step, for example, and many religions include group singing and chanting in their rituals, possibly as a means of promoting coordination and solidarity among people.

It may be premature to schedule all your working lunches at an Asian bistro rather than a French restaurant, but the results of Woolley and Fishbach’s study offer a first step in understanding how the meal experience affects professional interactions.