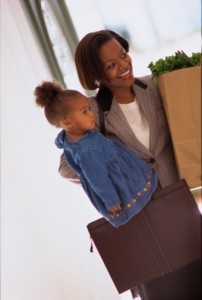 Whether they’re willing to admit it or not, hiring managers tend to doubt working mothers’ dedication to the job. Previous studies have revealed that the so-called “motherhood penalty” is rather rampant in the job market. People generally assume that working mothers are less committed, and therefore less capable, on their jobs.

One of the most telling studies on this mindset was published in 2007, when a team of researchers had a group of women, some of them wearing a prosthesis to make them appear pregnant, pose as either job applications or customers at retail stores. Store employees were generally more rude toward pregnant applicants vs. non-pregnant job seekers, but were kinder to pregnant customers than toward non-pregnant customers.

But working mothers may be able to offset this type of discrimination, according to a newly published study. Psychological researchers Beatriz Aranda of Malaga University in Spain and Peter Glick, professor at Lawrence University, hypothesized that mothers who express a dedication to work over family commitments can mitigate the motherhood penalty in the professional arena.

To test their theory, Aranda and Glick recruited business students to play the role of human resources managers for a manufacturing company. Each participant evaluated information about a highly qualified finalist for a managerial job. Some individuals saw a  dossier about a male candidate, while others saw information about a woman.  In personal profiles, each applicant, regardless of gender, expressed either a strong devotion to family or to work.  Some expressed a willingness to relocate, and to make other types of personal sacrifices for their jobs, while others said family commitments take priority and would prohibit them from relocating for work.

Participants were then asked whether they thought the applicants they evaluated should be hired, and were also asked what kind of resources, in the form of training and job responsibilities, they would be willing to offer the individual under consideration.

The results were a bit more nuanced when it came to resource allocation. Family-devoted fathers were slightly less likely to be afforded resources (e.g. training, big projects) in the experiment compared to work-oriented dads, suggesting what the researchers described as a gender-neutral “devoted-parent penalty”.

However, participants were far harsher toward family-oriented women vs. their work-oriented counterparts on this count.  Meanwhile, work-oriented mothers received no penalty in resources compared with work-devoted fathers.

Whether it’s a fair condition or not, working moms can control their career trajectories by the way they present their priorities to existing or prospective employers, the researchers conclude in the latest issue of the journal Group Processes and Intergroup Relations.

“Our results suggest,” they write, “that  working mothers can effectively puncture the motherhood penalty by stressing their devotion to work.”

APS Fellow Tyler Lorig is the Ruth Parmly Professor of Cognitive and Behavioral Science and a member of the Neuroscience Program at Washington and Lee University. More

A sample of research exploring how trait anxiety relates to attention, how choosing different career paths may shape personality development, and how attentional selection contributes to risky decision making. More