I’m married, but I have also been single for significant 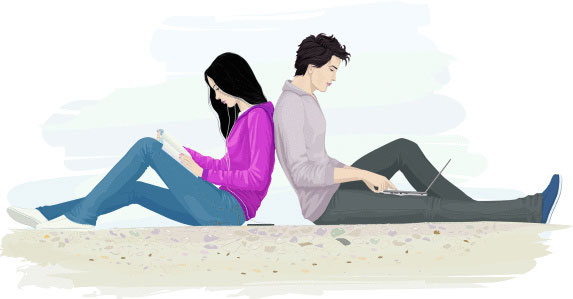 stretches in my life. I think I’m being honest when I say that I can see the virtues in both life choices, and understand why someone might opt for either. And  I have certainly never felt judged, or discriminated against, for choosing to be single or for choosing a partner.

So it came as a surprise to me to read recently about “singlism.” Apparently, some people do feel judged, and unfairly, for their status. And intriguingly, this subtle form of discrimination appears to cut both ways. That is, people who are single by choice claim that they are treated unfairly for not tying some kind of knot, while married people—especially in large urban centers—feel that they are marginalized in a predominantly singles culture. Why would this be?

Well, the answer may be rooted in human psychology, specifically in our powerful tendency to idealize whatever life choices we have made. A well-established psychological theory—known as cognitive dissonance theory—argues that humans cannot tolerate the discomfort that comes from making an irreversible and regrettable choice. A team of psychological scientists, headed up by Kristin Laurin of Stanford University’s Graduate School of Business, thought that this dynamic might apply to relational prejudice as well.  Not that all relationship choices are not necessarily regrettable, but they are either/or, so these scientists reasoned that people would tend to idealize their own choices and situations as correct and preferable—not just for themselves but for everyone. They decided to explore this possibility with a few simple laboratory experiments.

If it’s true that people idealize their relational status, then this idealization should be especially strong in people who feel their status is unlikely to change. So Laurin recruited volunteers who were unambiguously coupled or single, and then used a standard tool to measure relationship stability—the perception that one’s status will be lasting. This is not the same as satisfaction or commitment. Indeed, people can be happy in a relationship they know is doomed, or discontent in a death-do-us-part relationship. The same applies to people who have opted to be single. Each volunteer also answered questions about how much they idealized their relational status. Did they see being in a couple, or living single, as a desirable norm for society? Or something unwanted? Or simply a personal choice?

Then they crunched the data, and they found that both coupled and single volunteers idealized their own status—and they were more likely to idealize their status if they saw it as unlikely to change. In other words, if you’re married and plan to stay that way, or single and plan to stay that way, you are apt to see your choice as the best choice for everyone. That’s singlism—no matter which direction.

Is this prejudice just a harmless form of self-delusion? Or does this tendency—to make everyone’s life choices for them—actually affect the way we judge and treat others? Laurin addressed this in another study, focusing on volunteers judgments of others. Figuring that Valentine’s Day intensifies the existing social division between singles and couples, she recruited young men and women on that romantic holiday, and measured their status and stability like before. All these volunteers then read about a hypothetical person of the same gender, either single or coupled, and wrote a short description of how they imagined that person spending Valentine’s Day evening. Finally, they rated that person’s happiness and fulfillment, and indicated whether that person would have had a better Valentine’s Day if they had a different status.

The results, described in a forthcoming article in the journal Psychological Science, reinforced the earlier findings. The more long-lasting the volunteers perceived their own status to be, the more positive they were about others who shared their status. These people were also more negative about those who made different choices. But interestingly, those who saw their own status as fragile—these people judged people with different status more positively. They didn’t feel the need to judge others because they weren’t all that invested in their own life choice—or perhaps they were anticipating switching sides.

Laurin and her colleagues ran two more experiments, with mixed but worrying implications. In one, people with stable status—either coupled or single—showed no favoritism toward same-status others in hiring decisions. But in another, they did show favoritism toward others with the same relational status in voting decisions. When all the studies were combined into one analysis, the results showed that perceived stability led both coupled and single men and women to treat others like them more favorably. Notably, this effect was even stronger for single people than for people in couples.

In short, singlism is indeed potent and double-edged. Because most people still do opt for marriage, this bias probably hurts more singles overall. But the intolerance that couple people feel is no less real or harmful.

The inner workings of our hearts may always remain a partial mystery, but psychological scientists are on the forefront of what makes love, sex, romance, and attachment so alluring to human beings. This Valentine’s Day, the Observer shares some of the field’s most recent findings on the science of attraction. More