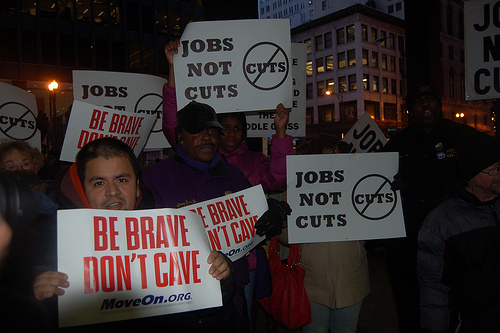 Our lawmakers may have averted the fiscal cliff on the first of the year, but the threat of sequestration still looms over the nation. If the Congress and the White House cannot agree on the particulars of deficit reduction by March, draconian across-the-board cuts will slash both national security spending and core domestic programs, ranging from education to public health to environmental protection.

Every federal budget is, underneath those numbers, a set of values—many related to protecting Americans from harm. But the mandate to cut spending means choosing among those values and safeguards. Is it more important to protect Americans from another terrorist attack or the flu, from unhealthy pollution or computer hackers? Our choices are both political and moral judgments.

And perhaps psychological  judgments as well—or misjudgments, as new research out of Princeton University suggests. Psychological scientists Daniel Ames and Susan Fiske are reporting evidence that our judgments of harm may be badly distorted by deeply-rooted cognitive biases that operate out of our awareness. Specifically, we may be prone to exaggerate damage when we perceive it as deliberate and blameworthy, as opposed to unintended consequences or acts of nature.

Ames and Fiske ran several experiments to explore how intention shapes our seemingly objective judgments of harm. In one, for example, they had a large group of volunteers read a simple vignette about a small company. Employees shared in this company’s profits, but unhappily the CEO made a poor investment that ended up hurting the workers financially. Half the volunteers read a version in which the CEO truly believed he was investing wisely, but made a mistake. The others read that the CEO was secretly thinking that financial losses would spur the employees to work harder in the future. In other words, he harmed them intentionally.

So the only difference in the stories was the CEO’s intent. The harm was identical in both versions: anxiety about paying down debt, postponed family vacations, dips in credit ratings—personal loss, but not devastating loss. Plus, the workers in both versions were unaware of the bad investment and any malicious intent.

When asked to assess the harm resulting from the CEO’s misguided investment, the volunteers thought that the workers were hurt more when the harm was intentional. What’s more, this distorted judgment of harm resulted from a desire to blame the CEO. They saw the CEO, under these conditions, as morally culpable and deserving of punishment, and this judgment in turn made them exaggerate the workers’ suffering.

The scientists ran a couple other versions of this experiment, to rule out other interpretations of the data. As described in an article to appear in the journal Psychological Science, these studies verified the core finding that malicious intent triggers a desire to blame, which magnifies the perception of harm. But they wanted to look at this idea in a different context—this one much more directly relevant to current budget debates. This time the volunteers read a vignette about farmers who relied on a river for their water. But the river dried up, causing a water shortage that destroyed their crops.  As before, some volunteers read about an unintentional harm—the river was dry due to a lack of rain—while others read that a nearby landowner had deliberately diverted the flow of water—with the clear intention of damaging their crops.

Then all the volunteers were shown the same list of specific damages and costs: for example, medical costs at $80. They were shown seven itemized costs in rapid succession and asked to sum up the total damage in dollars. In other words, it was a completely objective arithmetic problem, yet the volunteers didn’t always see it objectively. Those who had read about a natural disaster summed up the total costs accurately: Their average tally was $2753, compared to the actual cost of $2862. But those who thought the farmers had been cheated by the landowner—those volunteers grossly overestimated the damage done, putting the figure at about $5100. That’s not even close.

This means that, when volunteers were primed to blame a culprit, they couldn’t even add a simple list of sums without distortion. They saw the same addition problem as the other volunteers—those not focused on blame—yet they came up with a wildly overblown estimate of personal damage. Ames and Fiske ran this experiment again, with incentives to be as accurate and objective as possible—and incentives not to assess punitive damages—yet the biased judgment persisted. In the volunteers’ minds, the landowner’s malintent literally added dollars to the farmers’ suffering.

People suffer harm every day. If it’s not a farmer’s crops, it’s the hurricane victims on the Jersey shore, or the victims of a food-borne illness, or a firefighter who has lost his job, or the innocent people who died in the World Trade Center. The federal government cannot protect every citizen from every bad thing. But lawmakers and budget officials add up columns of numbers much the same way as these irrational volunteers, and should at least know that their bottom lines are being distorted by a powerful urge to blame and punish wrongdoing.

“The Case for Implicit Associations: Teaching Students What Lurks Beneath Their Awareness” by Nathan DeWall and “Can Cognitive Flexibility be Learned?” by Cindi May and Gil Einstein. More