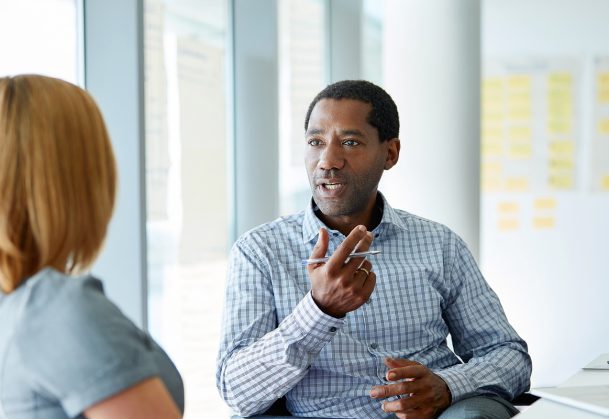 People attribute more humanlike qualities to those expressing opinions they disagree with when the opinions are spoken as opposed to written, according to new research in Psychological Science, a journal of the Association for Psychological Science. The findings explore how specific aspects of speech, such as intonation and frequent pauses, may serve as cues that humanize the people who are speaking, making them seem more intellectual and emotionally warm than those whose opinions are written.

“Our findings show that even when the content is the same, the medium through which it is expressed can affect evaluations of the communicator,” says lead researcher Juliana Schroeder of the Haas School of Business at the University of California, Berkeley. “It is possible that variance in communicators’ natural cues in their voices, such as tone, can convey their thoughtfulness.”

“Preliminary evidence from one of our studies suggests that the medium by which an opinion is expressed may even influence how persuasive it is,” she adds.

In previous research, Schroeder investigated how the medium of communication affects how recruiters evaluate job candidates. In the months leading up to the 2016 presidential election in the US, she and coauthors Michael Kardas and Nicholas Epley (both of the University of Chicago Booth School of Business) hypothesized that this question might be especially relevant in the context of controversial political and social issues.

In one experiment, the researchers video-recorded six participants as they expressed their actual opinions on one of three polarizing political and social topics: abortion, the US war in Afghanistan, or rap versus country music. For each topic, one person expressed their opinions in favor of the issue and one against.

The researchers then randomly assigned a separate group of online participants to receive one of the messages – some saw the full video, some heard only the audio, and some received a transcript.

Afterwards, these online participants reported whether the communicator seemed to possess sophisticated intellect – they rated, for example, the extent to which he or she seemed “refined and cultured,” “rational and logical,” and “like an adult, not a child” relative to average person. They also reported the communicator’s emotional warmth relative to the average person – they evaluated the degree to which he or she seemed “superficial,” “emotional, responsive, warm,” and “mechanical and cold, like a robot.”

The results showed that the medium of communication mattered particularly when the communicator and the evaluator disagreed on an issue: Participants judged communicators who expressed an opposing opinion via video or audio as more humanlike – that is, more sophisticated and warm – than those who described their opposing opinions in text form.

Participants who watched a video and those who listened to audio gave similar ratings, suggesting that visual cues visual cues are not additionally necessary to endow a speaker with human qualities – an audio clip is sufficient.

Two additional experiments, in which communicators explained why they supported a particular candidate in the 2016 US Presidential election, replicated this pattern of results. Preliminary data from one of the experiments suggested that participants also found messages communicated by voice to be more persuasive than those communicated by text, regardless of whether that text was written by the communicator or was a transcription of a speech.

The three experiments produced less consistent results, however, when the communicator and evaluator were in agreement.

A fourth experiment revealed that specific variations in how people speak – such as differences in intonation and the degree to which they pause – may help to explain why people perceive speakers as possessing more humanlike qualities than writers.

“Whereas existing research demonstrates that cues in speech increase accurate understanding of mental states, our experiments demonstrate that a person’s voice reveals something more fundamental: the presence of a humanlike mind capable of thinking and feeling,” Schroeder and coauthors write in their paper.

This may become increasingly important as modern technology changes the way that people interact and communicate.

“If mutual appreciation and understanding of the mind of another person is the goal of social interaction, then it may be best for the person’s voice to be heard,” the researchers conclude.

All data and materials have been made publicly available and the design and analysis plans were preregistered via the Open Science Framework. All stimuli that the communicators generated for the experiments reported in this article are available upon request from the authors. The complete Open Practices Disclosure for this article is available online. This article has received badges for Open Data, Open Materials, and Preregistration.