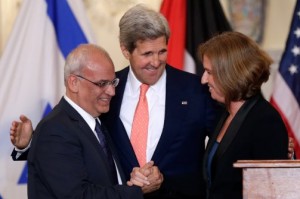 Israeli-Palestinian peace talks begin this week, and it’s fair to say that attitudes range from guardedly hopeful to sneeringly cynical. After all, this conflict has been going on since the mid-20th century, with a lot of dashed promises along the way. It was just a year ago that missiles from Gaza were raining down daily on Israel.

All of the final status issues are on the table, both sides agree—land, borders, settlements, Jerusalem. It’s widely assumed that the animosity and conflict between Palestine and Israel are fueled by these geopolitical issues, rather than by clashing religious values. That is, most believe that competition over resources is the core issue dividing the two groups—groups who also happen to have different religions.

But is this true? Are religion and religious values really tangential to this enduring conflict? This same question could of course be asked of other hateful conflicts—Catholics and Protestants in Northern Ireland, Muslims and Hindus in South Asia, fundamentalists and secularists right here at home. New evidence is raising questions about this basic assumption, and suggesting that certain aspects of religion may indeed fuel these violent clashes.

Arizona State University psychological scientist Steven Neuberg and colleagues have been studying what they call “religious infusion”—the extent to which religion permeates a group’s private and public life. Religious infusion is not tied to any particular religious belief, nor is it a necessary feature of any religion, but any religion might be highly infused throughout a given society. For example, religious trappings are a much more visible feature of life for Catholics in Nicaragua than for Catholics in, say, Austria. Such infusion can engage groups in a powerful way—through religiously tinged public events and discourse—and this engagement can in turn strengthen group prejudices and spur aggression.

At least that’s the theory, which Neuberg has been testing. He has been exploring the contribution of religious infusion to conflicts around the globe. He wanted to see if the extensive presence of religious rituals and discourse in everyday life had a moderating effect on two common sources of group conflict—competition over resources and value conflicts. He gathered data using the Global Group Relations Project, which he and his colleagues designed to tap into a network of scholarly experts’ knowledge of regional conflicts. They investigated nearly two hundred groups—some religious, some ethnic, some national—paired within 97 sites around the world. For example, they studied Turks and Greeks in Cyprus, Hutu and Tutsi in Rwanda, Catholics and Protestants in Northern Ireland, and the state and the Tamil minority in Sri Lanka. Each expert supplied information on two paired groups, touching on a wide range of social, political, religious and psychological issues.

Based on these expert observations, each group was evaluated for religious infusion. The scientists also gathered data on value incompatibility and resources—including basics like food and water but also education and economic resources. They also calculated each group’s political power and, finally, each group’s evidence of conflict—prejudices, aggression, violence, and so forth. Then they crunched all the data together, and they report the results in a forthcoming issue of the journal Psychological Science.

Religion was far from irrelevant to these global conflicts. Indeed, when religion was highly infused in everyday group life, groups were especially prejudiced against others, and more apt to discriminate—specifically against those holding incompatible values. What’s more, the disadvantaged and powerless avoided aggression toward the rich and powerful—but only if religion did not infuse their lives. If religion did infuse their lives, they were highly aggressive toward their more fortunate counterparts—despite the costs of such actions. Put another way, religious rituals appear to diminish fear, and boost the willingness of the weak to throw caution to the wind.

Perhaps religious infusion can be seen as a strategy for controlling the ebb and flow of conflict around the world. And the agenda by those controlling agents is driven by the production and use of arms along with the need to control nations and depopulate through ethnic cleansing.
These warring groups are often close neighbours and their inbuilt hatred of each other is in sharp contrast to the close kinship they would otherwise share if they were not infused.