A Psychologist’s Guide to Online Dating

The Atlantic: Edward Royzman, a psychology professor at the University of Pennsylvania, asks me to list four qualities on a piece of paper: physical attractiveness, income, kindness, and fidelity. Then he gives me 200 virtual “date points” that I’m to distribute among the four traits. The more I allocate to More

The Psychology of Online Comments

The New Yorker: Several weeks ago, on September 24th, Popular Science announced that it would banish comments from its Web site. The editors argued that Internet comments, particularly anonymous ones, undermine the integrity of science and lead to a culture of aggression and mockery that hinders substantive discourse. “Even a More

The numerals 2 and 5 are magic numbers for APS this year. Not only is the association marking its 25th birthday, and nearing a membership count of 25,000, but we’ve just surpassed 25,000 followers on Twitter. Our followers represent a mix of scientists, students, writers, businesspeople, teachers, and more, reflecting More 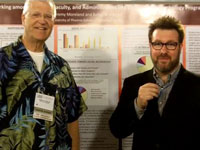 While social networks proliferate, insight is lacking about how graduate students, faculty, and administration collaboratively engage such networks. In early 2011, University of Phoenix rolled out what has become the world’s largest, single institution, educational social networking site, PhoenixConnect. The authors examined graduate student, faculty, and administrator contributions and interactions More APS has been a family affair for us over the years. When the girls were little, they would come along for the ride. Since 2009, though, they have been active participants. To emphasize the “Psychology as a Hub Science” approach proposed by former APS President John Cacioppo, we combine Kristin’s More

Social Anxiety in the Age of Social Networks

The advent of the Internet has changed the way individu­als and groups of individuals interact with one another and the world. In fact, an entire generation has been brought up with the idea that “socializing” includes an online component. Yet despite the recent technological advances in social communication, and the More